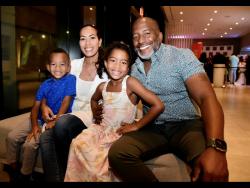 What do you want to be when you grow up? This is probably the most serious question ever asked of a child. And those answers can vary from a lawyer or a policeman to a doctor, a soldier or a firefighter. These days we have seen an evolution in career options. But a girl doesn’t just share her youthful ambitions; she puts her dream into action.

Seven-year-old Logan Watkins is one of the children’s designers in this year’s Island Child Style show. The young designer, who also rocks the runway as a model, works diligently behind the scenes to bring her designs to life and thoroughly enjoys the process. “What I enjoyed the most was designing my own clothes and seeing them in person, because I love seeing what I do in real life,” Logan said. Living.

She recently launched a piece from her line called Logan’s Unicorn Collection on the catwalk at the launch of Island Child Style, to the amazement of the public. Inspired by her own imagination, she opted for an underwater mermaid theme, sporting bright colors and sparkling sequins. His role model, Haley Matalon, brought the right amount of splashes to the runway, one that was “river” to leave viewers wanting more. The duo then emerged onto the stage for the Creators Walk, where they were greeted by a sea of ​​love from onlookers.

When asked how the showcase went, Logan revealed that it was a great experience. “My favorite part was meeting my own works in person. Every time I see that, I feel like I’m getting more creative,” she shared. “What I think has helped me as a designer is the way I work with art, like the details and the colors I have to use, as my imagination tells me what to draw. .”

She also enjoyed modeling in the fashion show, adding, “Every time I practice, I feel like I can improve and be more confident.” Her parade adventure naturally played an important role in her outlook on clothing as a designer.

Beaming with pride at her side was her mother, Kimberlee, who continues to be impressed with her daughter’s remarkable talents. “The piece that was shown today is just a preview. There will be a lot more details about it,” she said.

Logan has always loved art, his mother said. “Ever since she could pick up a pencil, she’s been into art. She used to mix her mediums all the time, wanting to paint and create with pencils, markers and glitter to achieve different textures,” said she recounted.

But what created a shift towards design was the demand for doll clothes. “She really wanted to buy all these clothes for her dolls. And I was like, ‘You can’t buy stuff like that and buy stuff all the time.’ That’s when she said, ‘I have a great idea. What if I learned to make my own clothes for my dolls? Kimberlee revealed. This ingenious style move quickly transcended Logan into creating clothes for herself so mom didn’t have to buy too much for her. “She said to me, ‘If I can figure out how to make clothes for my dolls, then eventually I’ll learn how to make my own clothes, then you won’t have to buy me clothes and I can get this. I want,'” the proud mom added with a laugh.

The journey started with a toy sewing machine and different pieces of fabric. Kimberlee bought her daughter a designer sketchbook for girls, in 2020, and Logan went to town, sparking creativity on paper. “I noticed that she started using stickers and putting on different jewelry; the shoes were different. Then she started drawing freehand,” Kimberlee added.

After meeting local style specialist Norma Williams, whom Logan calls Aunt Norma, during a photo shoot with her father, photographer Dwayne Watkins, Logan asked for help on set. This initiative put her on the path to a goal. “Out of the blue she came over and showed me this amazing design with a princess cape and rosettes on the shoulders. She described her design and Aunt Norma hired her, asking her what she would think about designing things,” Kimberlee said.

The young designer started with five models. She was so dedicated to the cause that she woke up as early as 5 a.m. to make design part of her to-do list for the day. “I am overwhelmed. It’s more than just a fashion show. It’s a discipline she instilled in herself. She woke up on her own. I tried to help him with one of his drawings, [but] she erased my drawing and wanted to do something else. She is very precise on the location of the seams, the fabric to be used [and] which colors should be used where. I can’t wait for everyone to see his final piece.

Logan has completed a total of 15 creations, all by himself, which will be exhibited at Island Child Style on December 3.