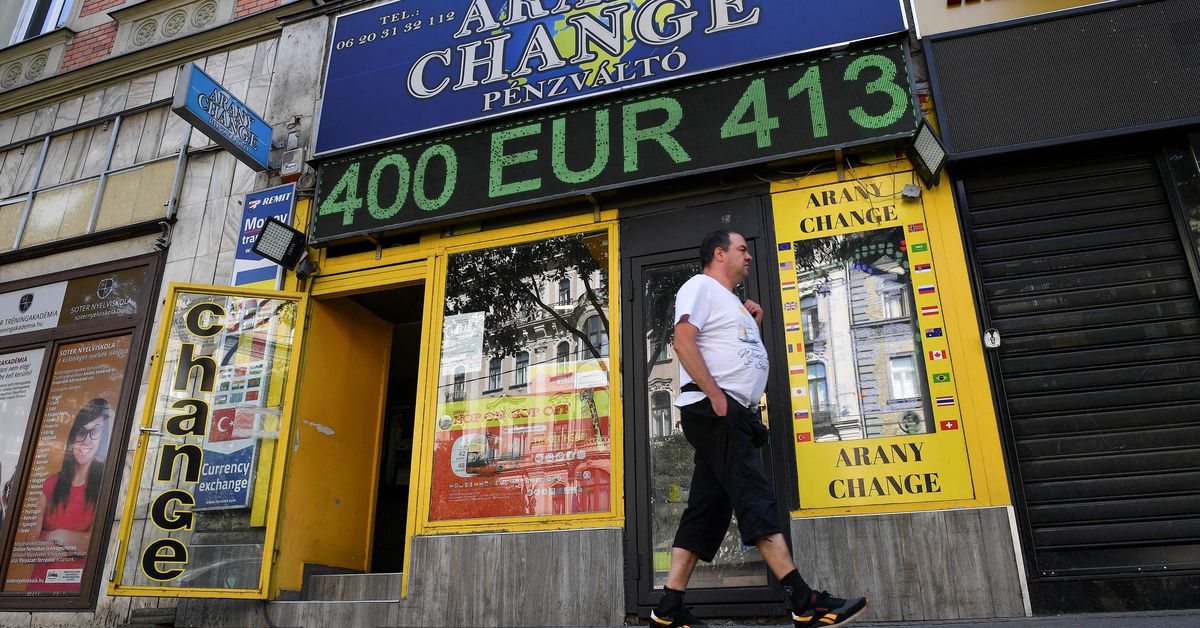 Analysis: Amid wild swings, some Hungarians are losing faith in the forint

A board at a currency exchange office displays the exchange rate from the euro to the Hungarian forint, in Budapest, Hungary July 18, 2022. REUTERS/Marton Monus

BUDAPEST, July 31 (Reuters) – The fall of the Hungarian forint after Russia invaded Ukraine is prompting some Hungarians to adopt the euro instead of the local currency, which has since lost more than half its value the coming to power of Prime Minister Viktor Orban in 2010.

Like the other members of the European Union, Poland, the Czech Republic or Romania, Hungary is far from adopting the single currency, the Orban government ruling out in the foreseeable future a decision which, according to him, would amount to a loss sovereignty over economic policy.

But the forint, which has been under pressure from Hungary’s twin deficits and a standoff with Brussels over the rule of law that freezes EU funds, is lagging the region again this year and some Hungarians are taking matters into their own hands.

An April Eurobarometer survey of countries not yet using the single currency showed support for its adoption was highest in Hungary and neighboring Romania, where euro payments have long been the norm in sales of used cars and house rentals.

The forint’s 8% decline against the euro so far this year, and its volatility highlighted by its nearly 4% two-day move earlier this month, have further boosted the appeal of the euro, although its use is still limited throughout the economy.

Shortly after Russia invaded Ukraine in late February, Laszlo Szucs, an attorney at law firm Reti, Varszegi & Partners PwC Legal, began receiving more calls from corporate clients asking how they could compensate workers for the decline of the forint.

He said most of the calls came from financial and business services companies and the manufacturing sector.

While workers and consumers in other European countries faced similar pressures from soaring energy and food prices, the weakening of the forint was an additional challenge.

As the outright payment of wages in euros is, with few exceptions, against Hungarian law, most companies opted for extraordinary increases worth 5-10%, while some offered end of quarter related to forint movements, Szucs said.

The IT services sector, where many work as independent contractors and bill foreign customers in euros, has switched almost entirely to euro contracts for new projects in Hungary over the past three to four months, he said. .

The National Bank of Hungary, which raised rates to cool prices, advancing another percentage point this week, declined to comment.

The government said its latest available data showed the euro accounted for 35.1% of non-financial business deposits compared to 34.7% in January, which it said showed no evidence of an increase in euroization.

However, on Saturday, Orban’s cabinet unexpectedly announced that it would allow companies to pay taxes in euros or dollars with forints – a move some analysts say could reduce the national currency’s importance. . Read more

FORINT ONLY IN ‘SPECIAL CASES’

Agoston Deim, who runs a small IT services company with a partner, said he switched to euro pricing in March when the forint breached a psychological barrier of 400 against the euro.

He said whereas a year ago the company rarely issued offers in euros, they now accounted for around half of turnover, with another quarter pegged to the euro exchange rate. , in line with a broader industry trend.

“When you can’t tell what happens the next day…and send price offers with a month’s delay, the risk of trading in forints just becomes too high,” he said. declared.

Akos Deliaga, who runs Talk-A-Bot, said his IT services company, which employs 15 people, has been pricing in euros for even longer, only offering forint-based prices in “special cases”. as in public sector orders.

“Unsurprisingly, our colleagues presented a very strong request to be paid in euros, or at least to have their salaries indexed to the euro,” he said in an email response.

The volatility of the forint has also led some property owners in Budapest and western Hungary to list in euros.

If these offers are still in the minority and mainly concern high-end properties, their number has tripled compared to last year, according to a survey by the Hungarian real estate site ingatlan.com.

“Hungarian owners don’t want to squander the value of their assets,” spokesman Laszlo Balogh said. “They peg it in euros, so if the exchange rate moves, they’re hedged.”

Some dealers in a high-end furniture store in the suburbs of Budapest also display prices in euros.

“An office furniture project can cost from 100,000 to 200,000 euros. It’s much easier to set the price in euros than having to keep adjusting prices to movements in the forint,” she said.

“It’s quite hard (to plan) in euros, but in forints it would be completely impossible.”