ABOVE: Reproductions of Roseville pottery in the Magnolia and Jonquil patterns (recto). LEFT: The Roseville mark on a reproduction does not have the “USA” designation.

“Imitation is the sincerest form of flattery that mediocrity can pay for greatness.”

The same can be said for the reproductions we see there – giclée prints of beautiful paintings, reproductions of classic furniture and this group of jars from Roseville Pottery.

A reproduction can honor a tradition or a style – Chinese artists often reproduced earlier styles to honor them.

The same goes for some of the so-called ‘centennial’ pieces of Chippendale, Hepplewhite and Sheraton style furniture made at the turn of the 20th century – these were fabulous quality pieces that paid homage to earlier works.

These makers often put their marks on the pieces – you knew you weren’t buying a piece that had passed through Thomas Chippendale’s workshop, but you were acquiring something worth displaying and built to last.

But not all reproductions are created equal – and not all pay homage to their origins.

This brings me back to the Roseville. 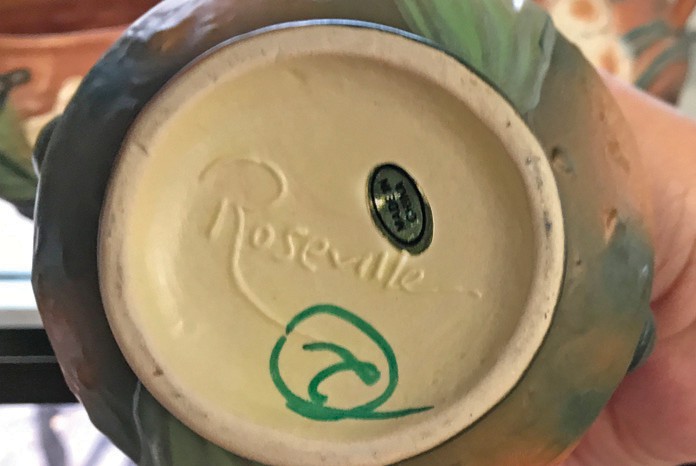 Roseville Pottery was the great mid-level American art pottery of the early to mid-20th century – just about everyone knew someone who had a piece in one of the Zanesville, Ohio company floral designs. These were goods you might expect to buy in a nice gift shop or department store for a few dollars—expensive in an era when minimum wage was around 40 cents an hour.

Pottery became popular with collectors in the 1970s and continued to rise in value until about 20 years ago.

This coincided with a general decline in the collectibles market and a glut of reproductions made in Asia.

Made in the 1990s in China for AA Importing, a St. Louis-based reproduction wholesaler, and marketed as the “Roseville style,” the band I saw in a thrift store had all the hallmarks of a reproduction – sprayed decoration, so you could see a slight outline of the spray mist on the edges of the pattern, uneven glazing on the inside, oversaturated coloring and a matte varnish that has none of the shine of the original pieces.

In other words, they don’t look right.

But the variations may not be obvious to novice collectors, especially when the newer pieces are marked Roseville.

The pieces I spotted in the thrift store had aluminum tags that said “Made in China”, which confirmed my suspicions. Also obvious: The Roseville branding lacked the “USA,” which appeared on many originals. This marking is often weak or nonexistent on reproductions, says Real or Repro (www.realorrepro.com), an online reference.

The people making the reproductions often put the Roseville mark on pieces that weren’t originally marked, other than paper or foil tags – like the old Jonquil and Luffa designs. The quality often also varies, from Real or Repro reports. But rarely have I seen a reproduction that wasn’t an obvious imitation.

There’s nothing wrong with buying a reproduction, as long as you know what you’re buying. Some dealers don’t know the difference – or do and don’t care. It’s when something is misrepresented as authentic that it becomes problematic – especially if you’re paying top dollar thinking you’re buying the real thing. That’s why it’s important to do your research before you buy.

The pots and vases I saw in the thrift store were about $8 each, which is about what you would expect to pay for a decorative painted pot. Similar vintage pieces can cost around $50.

As for me, I’d rather save my money for the real thing.