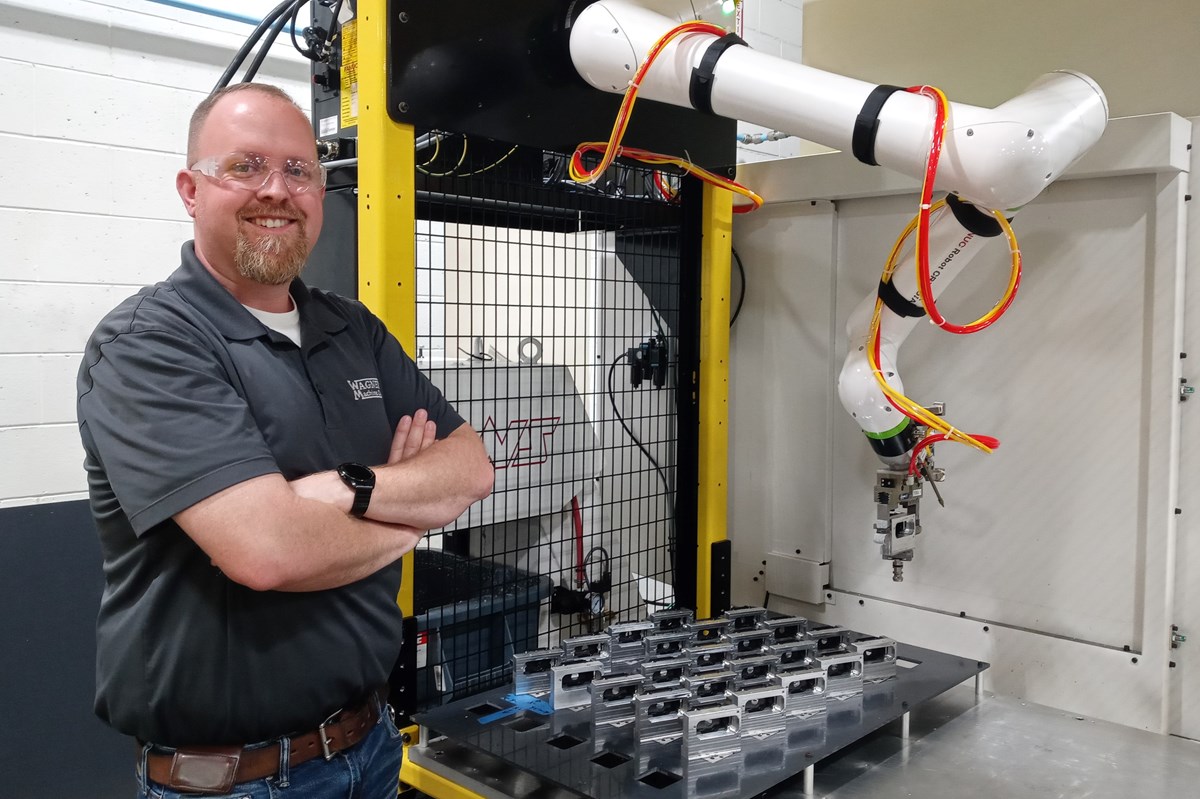 Wagner Machine’s milling department cobots enabled the high-efficiency manufacturer to expand production beyond the end of its shift and match the profitability of its turning department.

Advanced manufacturing technology is no longer just for big companies. Continuous innovations in automation, shop floor software and more have paid off with well-suited and affordable products and options for independent manufacturers. However, this maturation not only made these technologies accessible to work shops: it began to make these technologies a necessity to be competitive in the modern manufacturing market.

Automation has long been out of the reach of workshops for two reasons: cost and the reliance on low-mix production. Technological maturation drove down the prices of cobots, pallet changers, and other automation technologies, but high part mixes continued to thwart lights-out automation efforts.

Wagner Machine of Champaign, Illinois circumvents this limitation by recognizing that high mix automation does not necessarily mean full 24/7 automation. “If you’re trying to get 24/7 production, it takes a lot more planning than just trying to increase your production by 50%,” says Kurt Wagner, owner of Wagner Machine. Wagner used cobots to automate machine maintenance on five-axis machines for jobs requiring at least 50 hours of total machine time. As a single-shift shop, even four hours of overnight automation is a 50% increase in productivity, so programming time is compensated quickly enough to make automation profitable. By the time three of Wagner’s planned five custom cobot cells were online, robotic automation had increased production milling team productivity by more than 30 percent while improving on-time deliveries.

Peterson Machining is another versatile shop that uses automation to manage its workload. While the shop uses its five-axis palletized turn-mill for lighting-off automation, the machine’s pallet changer has proven equally useful for prototyping during the day. With six pallets, the workshop can prepare for several future jobs even if the machine is working on only one. “It allows us to stay productive when we would otherwise have to shut down the machine,” says Todd Peterson, co-owner of Peterson Machining.

Machine monitoring has had an equally large impact at AccuRounds. While shop floor machinists were originally apprehensive about moving from paper shop efficiency tracking to MachineMetrics, positioning the new machine monitoring strategy as better process-based shop acceptance instead than on people. The ability to quantitatively track machine uptime helped AccuRounds determine where additional training or tooling adjustments were most needed. The resulting shop improvement efforts resulted in a 20% increase in OEE and a 15% reduction in tooling expenses.

Cybersecurity options are now more available than ever for work shops – and more needed. Hacking attempts on job shops are not a question of if, but of when, explains Allison Giddens, president of Win-Tech. The cost of developing a cybersecurity plan is now far less than the cost of recovering lost data (and loss of customer trust) after a malicious cyberattack.

Read: The CNC reveals its secrets

Job shops aiming to work in the defense industry should also be aware that CMMC (Cybersecurity Maturity Model Certification) audits will soon be a requirement for sensitive jobs. These audits will require stores not only to invest in cybersecurity technology and training, but also to demonstrate their mastery of them.

Learn more about cybersecurity options in the Center for Emerging Technologies.

The International Manufacturing Technology Show takes place September 12-17, 2022 at McCormick Place in Chicago. Sign up for IMTS today to start planning your show.

Why eating during the day can benefit mental health