Owned and operated by five Long Beach residents, Ottimo Pizzeria opened February 2 in the Times Square Mall and has already been well received by the community.

“There are plenty of dining options here, but what goes best with beer?” asked co-owner Ciaran Gough, noting that Steady Brew Beer Co. also resides in the small center. “Pizza.”

The restaurant industry is not new to Gough. He and Ottimo co-owners Juan Carlos Guerra and Todd Miller also own The 908, an upscale restaurant located at the Long Beach Exchange, two miles from the new restaurant.

It has taken more than a year for the restaurant to open since its inception, Gough said. Meanwhile, the co-owners got to work putting together the menu. They traveled and ate at countless pizzerias in the area, even taking a trip to New York.

After several months of research, they nailed down their menu.

A row of pizzas awaits the oven at Ottimo Pizzeria on Thursday February 10, 2022. Photo by Brandon Richardson.

The pizzeria serves 14-inch Neapolitan-style pies with homemade dough and sauces, as well as low-moisture mozzarella, Italian meats, and other high-quality fresh ingredients.

In all, Ottimo offers eight pizza options ranging from $16 to $22. The restaurant also offers three salads—Caesar, Baby Arugula, and Caprese—for $8 each.

But the most flamboyant dishes on the menu are, by far, the dessert pizzas. For $12, customers can satisfy their sweet tooth with a mozzarella-banana-cinnamon-sugar pizza or a Nutella-strawberry-powdered sugar set. 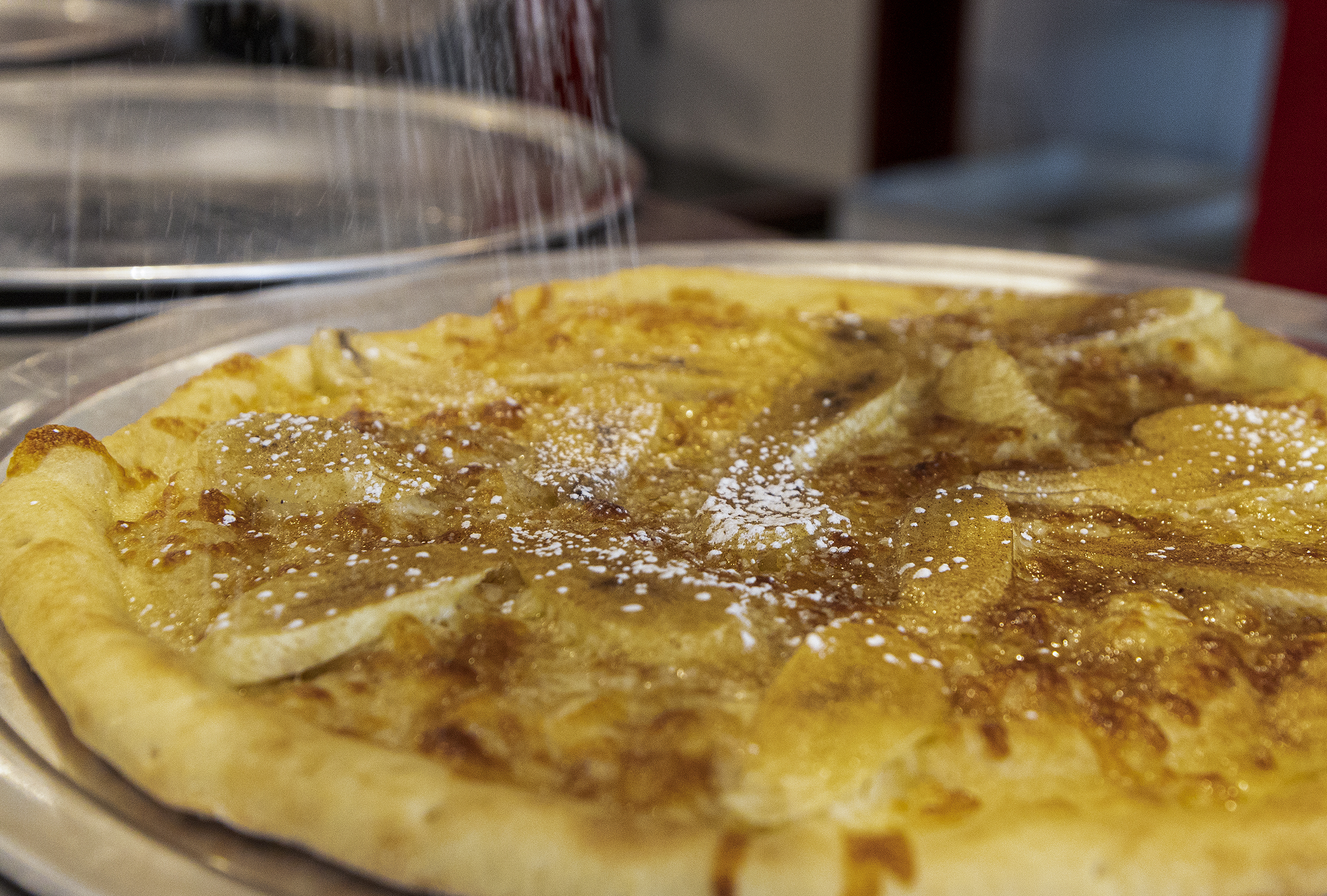 “We wanted to start with [this menu] as a base, and then we can grow from there,” Gough said. “The goal is to get it down, make sure the guests that come in are happy with the product, make sure you get consistency, and then see what people are looking for.”

Based on feedback and reception in the coming months, Gough said the menu could be expanded with more pizza sizes and recipes, additional salads and maybe even sandwiches.

Ottimo doesn’t serve beer, or alcohol for that matter, but the ownership team uses Steady Brew to their advantage (it doesn’t hurt that co-owner Marissa Textor’s husband is co-owner of the brewery). Eventually, Steady customers will be able to order pizzas from Ottimo at the brewery. The pizzeria staff will then ferry it through the parking lot to the hungry beer connoisseurs.

The planned partnership with the beer brewer helped inform the Ottimo menu, according to Gough. The band came up with a menu that they said “complemented what they were doing there with beer styles,” he said. 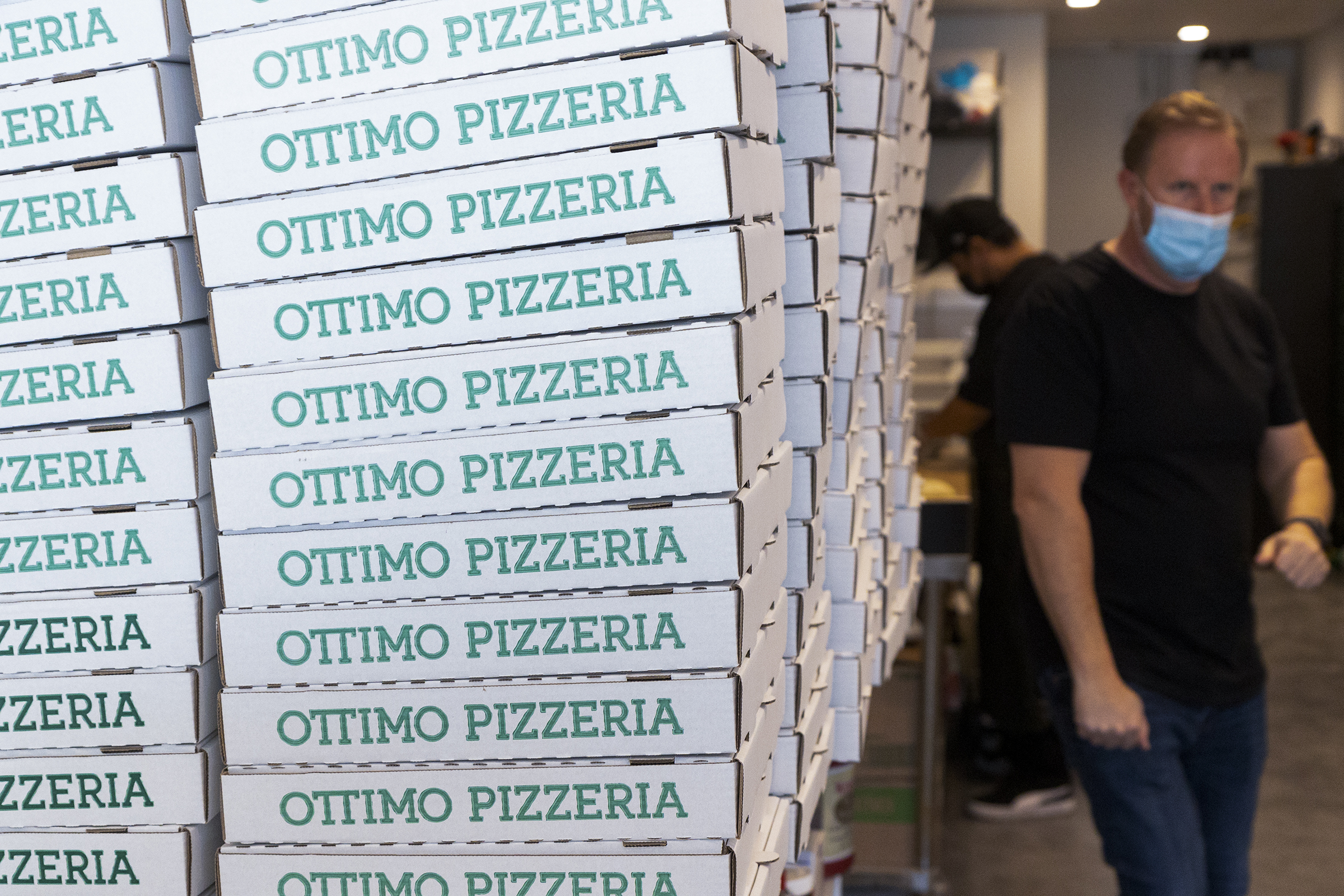 When it came to choosing a name, co-owner Mike Salvanera said a few ideas were thrown around. Including East Side Pizza.

“But when you think ‘East Side,’ you can also think of East Side New York pizza and we’re a long way from New York style pizza,” Salvanera said. “But ottimo in Italian means excellent and we’re just trying to make great pizza.”

Upon entering the front door, customers’ eyes are instantly drawn to the large red pizza oven in the outdoor kitchen, which allows anyone to watch the cooks tossing dough, basting sauces, place the cheese and toppings and slide the raw pizzas into the oven. 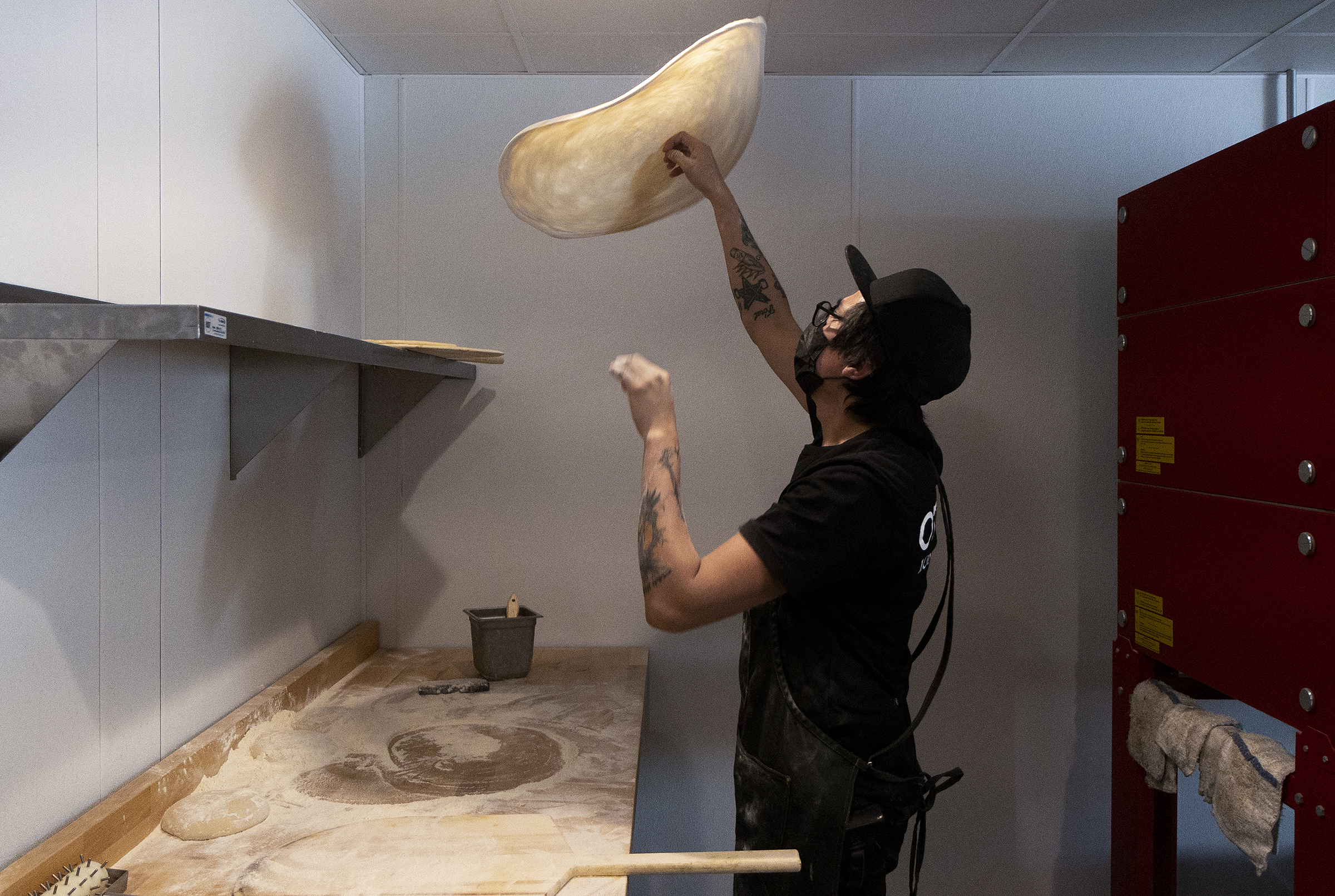 The interior design is simple and elegant with checkerboard tiles on the walls accompanied by fresh white paint.

“I feel like most of the great pizzas I’ve eaten were in cute, cozy family-run shops,” said Textor, who designed the interior. “You walk in and you feel this feeling of well-being and warmth. I wanted to stick with those traditional patterns, but flip them upside down, make them fun and a bit more modern and elevated.

“It’s clean, crisp and clean,” she added. “I hope this carries over to the food and that the whole experience is great.”

There aren’t any tables in the small space yet, but there will be a few eventually, Textor said. But with the communal outdoor dining area in the Century parking lot and patrons of the brewery, dining on site shouldn’t be a problem, she noted.

The first week and a half of service has been great, Gough said. As expected for a new restaurant, some days are better than others, but despite there being no public announcement of the opening, he said there was a line of customers on the first day simply because of the continuous pedestrian traffic of the mall, mainly residents of nearby neighborhoods. walks or bike rides. 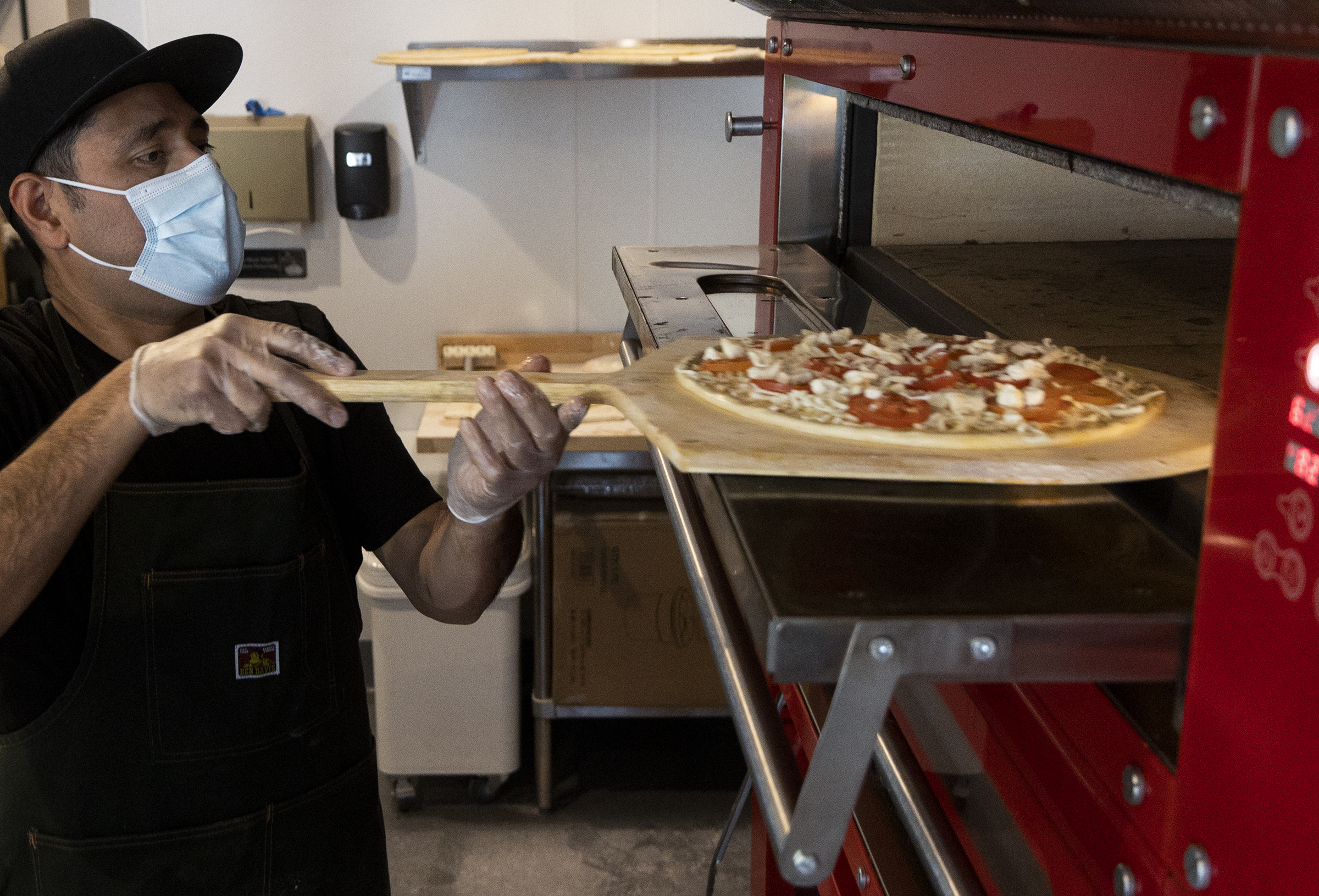 David Salvatierra puts a pizza in the oven at Ottimo Pizzeria in East Long Beach on Thursday, February 10, 2022. Photo by Brandon Richardson.

Over time, as the pizzeria adds hours, Gough said the staff size will grow in tandem. Once the operation is fully ramped up, he said he expects to have 20 employees, all of whom will share tips.

“People tip takeout — maybe it’s not as much as sitting down, but it’s still great,” Gough said. “It really helps us build a reputation as a place where you can make a lot of money. Then you have great people and your business is much easier to manage when you have talented people working for you.

Ottimo does not have his own delivery driver and has no plans to hire one, Gough said. However, pies from the restaurant can be ordered through GrubHub and other delivery services. The owners of Ottimo were able to negotiate good rates with the services, which allowed them to maintain an attractive profit margin, Gough explained.

Time Square has been experiencing a renaissance in recent years. The property has been renovated and now offers Mexican fare at Baja Sonora, sandwiches and baked goods at Coffee Parlor, Chinese fare at Yang Chow 2.0, and beer at Steady.

“There’s plenty of room for everyone,” Gough said. “Nobody really competes – we all have different things…and we’ll all rise together.”

“We just want to keep growing and be here for a long time,” Textor added. “I think it would be great for kids who come here to bring their kids here one day.” 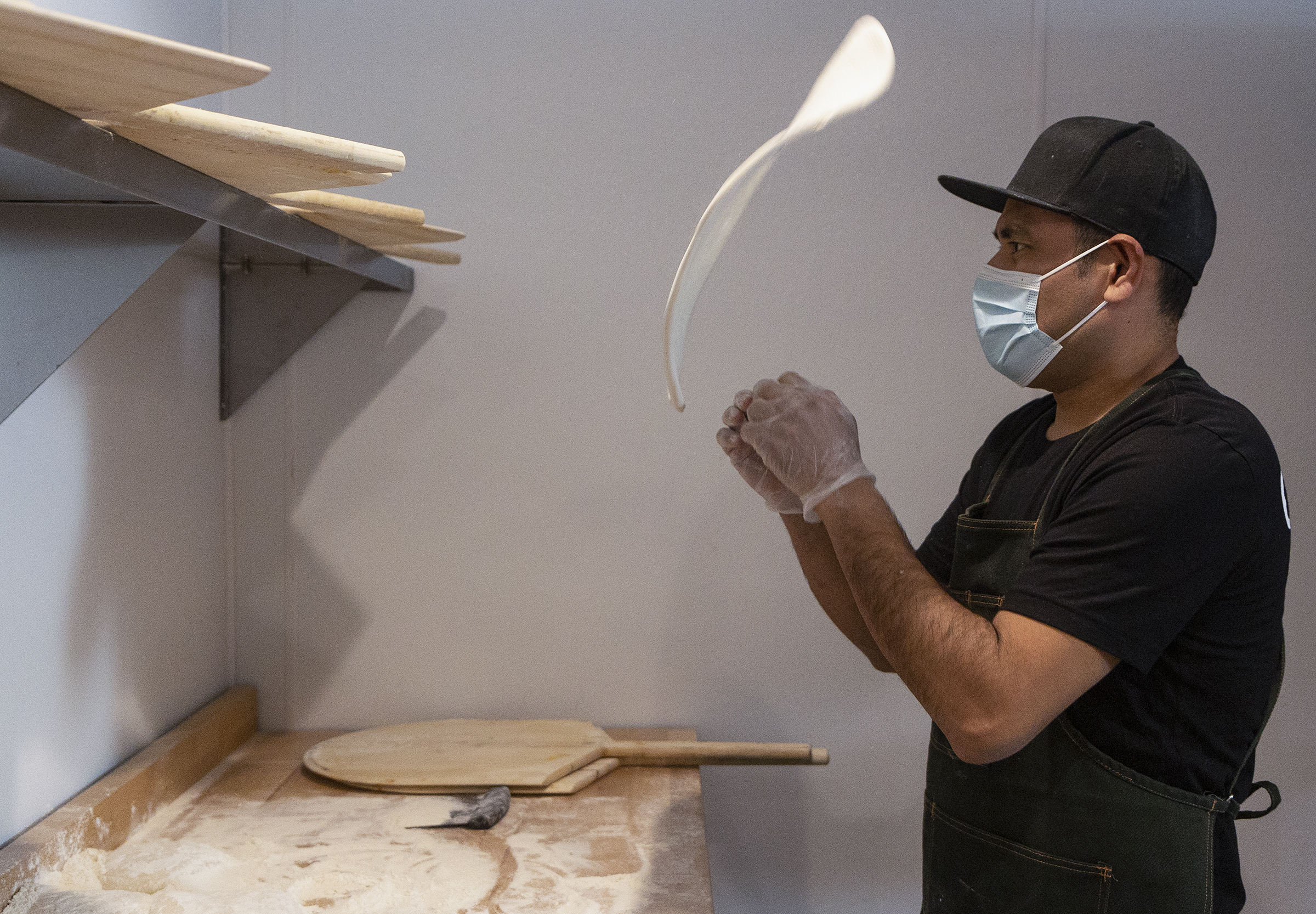 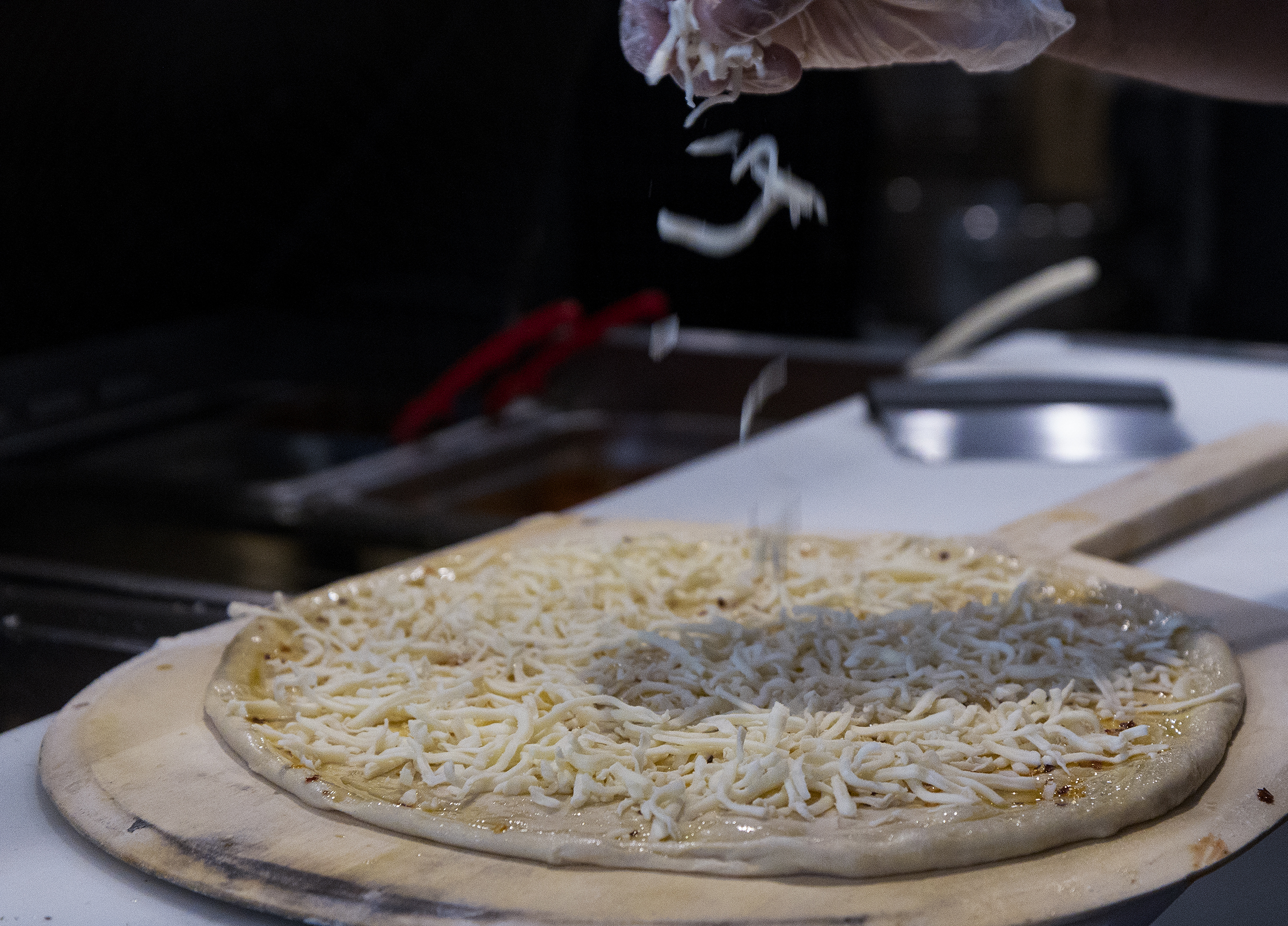 A pizza crust is covered in cheese at Optimo Pizzeria on Thursday February 10, 2022. Photo by Brandon Richardson.

David Salvatierra puts a pizza in the oven at Ottimo Pizzeria in East Long Beach on Thursday, February 10, 2022. Photo by Brandon Richardson. 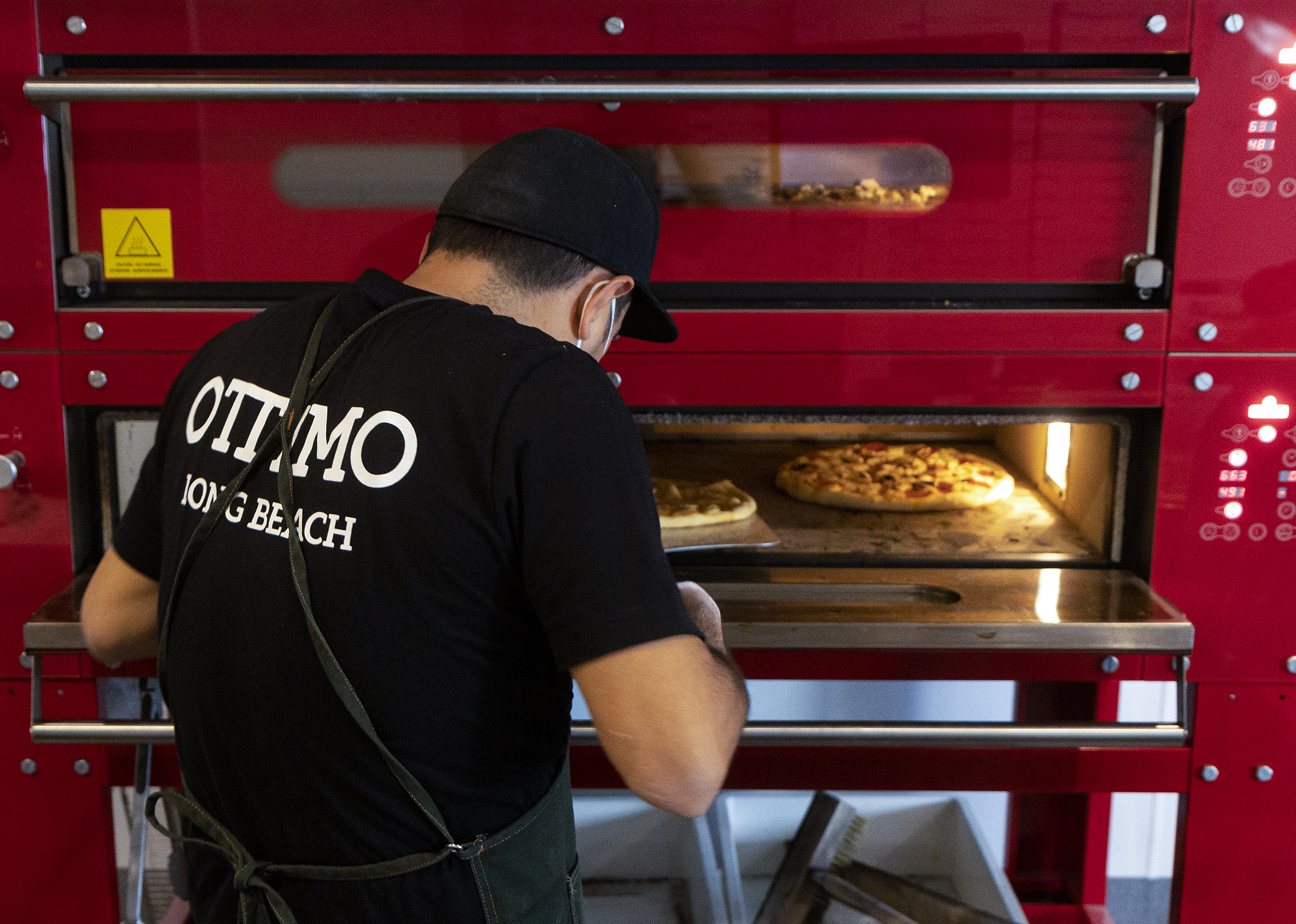 David Salvatierra checks out a pizza in the oven at Ottimo Pizzeria in East Long Beach on Thursday February 10, 2022. Photo by Brandon Richardson. 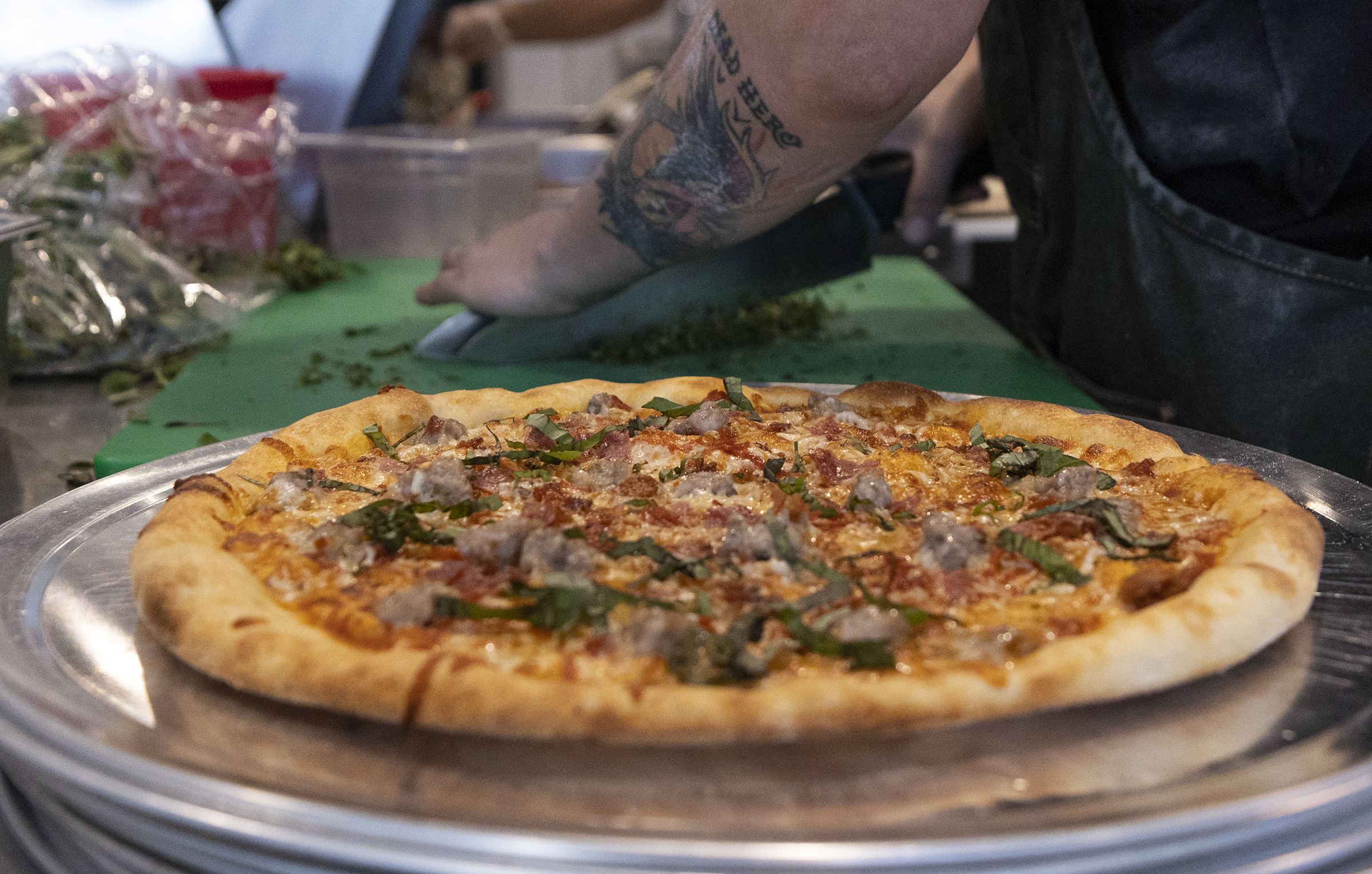 An employee chops ingredients to finish a pie at Ottimo Pizzeria in East Long Beach on Thursday, Feb. 10, 2022. Photo by Brandon Richardson.