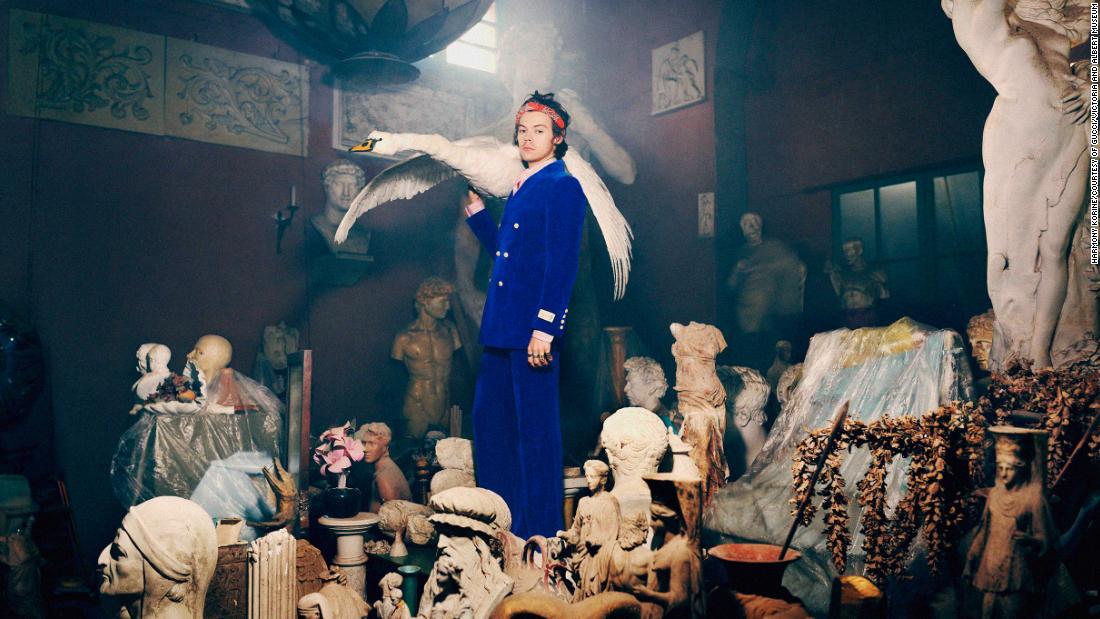 A long cape in an eye-catching powder pink; a floral brocade silk dress with a cinched waist; a military buff coat adorned with delicate ribbon fastenings – these are some of the more subversive items featured in the new ‘Fashioning Masculinities: The Art of Menswear’ exhibition, at London’s Victoria and Albert Museum (the V&A). But these decidedly feminine menswear is not the work of today’s new generation fashion designers – they are historical artifacts from the 17th, 18th and 19th centuries.

“We really want to show people the long history of evolving ideas about masculinity,” co-curator Rosalind McKever told CNN during the museum’s exhibit preview. “(What should men’s fashion look like) sounds like such a contemporary question, but it’s a much longer story than some people might realize.”

Located in the V&A’s underground gallery, “Fashioning Masculinities” focuses on three key aspects of menswear: underwear, extravagant outfits and, of course, suiting. Although each item flows rhythmically onto the next, it’s not your typical journey through history. Instead, contemporary looks from young designers sit alongside their historical references, often blending seamlessly into the past. A corseted silk dress with a full farthingale-style skirt looks straight out of a 16th-century ballroom, when in reality it debuted last September on a London catwalk during the Edward Crutchley spring- summer 2022.

Pink, Frilly and Fun: Why Men’s Fashion History Will Surprise You

Plaster casts of classic statues such as Apollo Belvedere and Farnese Hermes stand opposite a Calvin Klein advertisement, showcasing an almost ancient societal norm: rippling muscles and tense stomachs. But for every exhibit that champions a traditional version of masculinity, there are three others waiting to exaggerate or completely dismantle the performance of gender. For example “Tiresias”, a video piece by Canadian transgender artist Cassils plays a few meters from European ivory statues. In it, an ice sculpture of a classically idealized male torso disintegrates with the body heat of Cassils’ naked body pressed against it. Once the ice has melted, the viewer finds himself with a new image of virility: a transmasculine body without surgical intervention.

While “Fashioning Masculinities” focuses on menswear, gender fluidity is the foundation of much of what is featured. It’s a school of thought that promotes authentic living (and dressing), says gender-fluid designer Harris Reed, who features in the exhibit. “I got into my craft because I didn’t want to make another box for what a woman or a man is, or even what a non-binary person is,” Reed told CNN. for this body, for this being. It’s about living without limits and without borders.”

The exhibit includes a metallic fuchsia ensemble with large puff sleeves, a large ruffled collar and a pussy bow created by Reed while still a student at London’s prestigious Central Saint Martins fashion school. It became the template for a custom design that Harry Styles would wear on his 2017-18 world tour and catapulted Reed into the limelight overnight. Years later, he designed a costume dress for Styles in his monument Shooting the cover of Vogue in November 2020.

“To be included in an exhibit like this is quite surreal,” he said. “I remember going to a museum when I was little and not seeing any representation of myself, so it’s quite emotional to come here today and really see everything together.”

“We’re seeing such creativity, enthusiasm and diversity in the menswear industry,” McKever said, “but also a shift within the fashion industry to think differently about gender.”

“Fashion is one of the easiest things to move the conversation forward about gender, about queer identity, about self-expression,” Reed agreed. “It’s starting to change how we interact with each other and how we grow as a society.”

“Fashioning Masculinities: The Art of Menswear” is open from March 19 to November 6, 2022.

Is Guangzhou the future of luxury in China’s Bay Area?