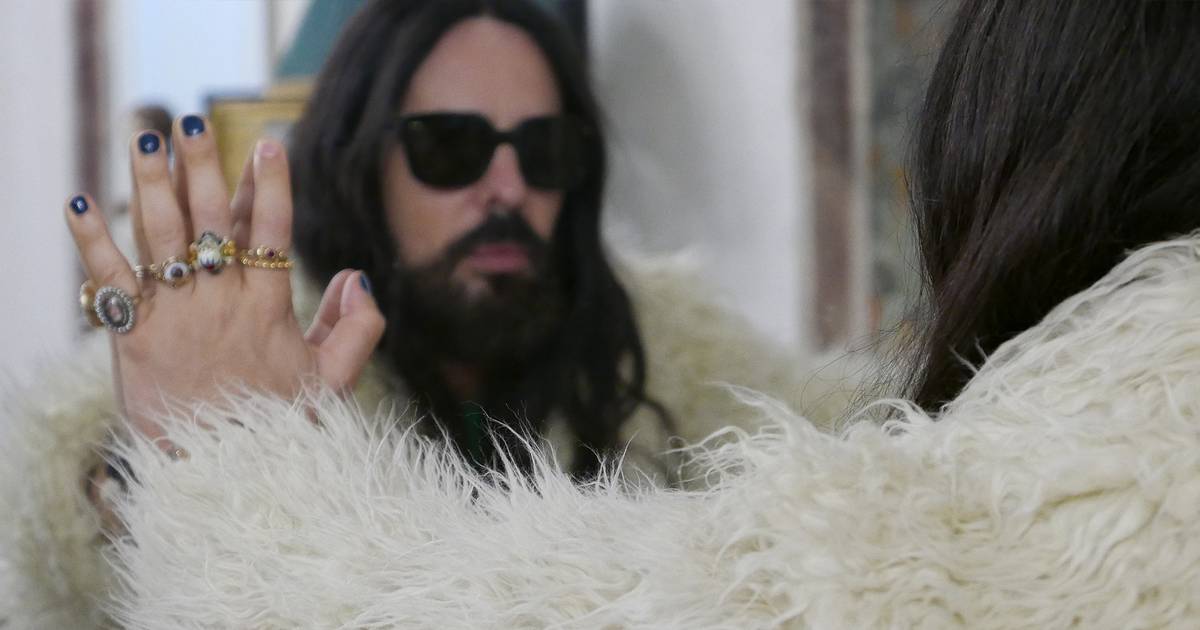 On March 19, the Victoria and Albert Museum in London will open Fashioning Masculinities: The Art of Menswear, its major fashion exhibition for 2022. It promises to “explore how designers, tailors and artists – and their clients and models – built and executed masculinity, and stripped it down to the seams. The V&A partner for the show is Gucci. How could it be otherwise? There is no other contemporary brand that can claim to deconstruct masculinity with such impact. Or, for that matter, make it a radical performance. If further proof were needed, the collection that Gucci Pied Piper Alessandro Michele is showing during the ongoing Milan Fashion Week, usually a launchpad for next season’s womenswear, will be a men’s show.

If Gucci’s return to the conventional fashion calendar felt a bit like a step back after all the extra-curricular and intra-pandemic activity the brand has engaged in over the past two years, Michele’s decision to show men’s clothing confirms its playful iconoclasm. “I didn’t do all of this because I was against the schedule,” he says. “The reality was that I was declaring the idea that I am free to do it or not to do it.” Or the reality was that Italy was so confined that the only alternatives were… alternatives, like films with Gus Van Sant, or online film festivals, or hours of Warholian cinema verité. “It was a weird time,” Michele says. “I didn’t really feel the seasons. I felt disconnected from the company. And I got really deep into what fashion was and where it could change the pattern of things. I couldn’t do a fashion show and I thought there was another way to let fashion do the talking. I think the company did such a good job because we found different things at a time when it wasn’t really possible to do the same things. It was therefore also an opportunity to say that fashion is more than just a fashion show. It can be different in a million ways.

Yet we are back with a fashion show. Exquisite Gucci, Michele called it. “The real fashion show that I missed,” he enthused. “I mean, it’s like sex. If I need to make love, I want to do it sex.” That’s right, there’s nothing like the real thing, baby. So there is a stage, because Michele reflected on the power of catwalk in fashion. And there is another experience that he cryptically says is very him. “In a time of collaboration, I want to say again that I’m not used to this kind of stuff. I didn’t call it collaboration, I put a million different references in my show, because I really believe that’s fashion. It’s a matter of infection. I know there is a better word for this in this time of Covid. But what I want to put back on a catwalk are all the pieces that I really love, from the street to things that really represent my aesthetic.

Michele’s most recent street experience was the show he hosted on Hollywood Boulevard in November. “In a way, it was kind of a political act,” he muses, “to let people feel the space of the city. It was like an installation. It was almost more powerful without the people. We really felt Los Angeles, the gravity of the buildings, the space, the signs on the stores. Grauman’s Chinese Theatre, surely one of the most iconic buildings in Hollywood history, was the hub of the show. Michele projected himself into his fantasies of a Hollywood night in the 1920s, when this extraordinary pagoda-like structure was surrounded by the low banality of local retailers. Testimony to the power of dreams. “It’s like going to the Acropolis,” he marvels. Same thing — gods and goddesses. “I went to Hollywood because I was looking for my roots, why I’m a fashion designer. The roots of the brand are also Hollywood. Hollywood stars of the 50s, 60s and 70s chose Gucci to express the way they lived in real life, not just on set. Gucci provided accessories to the gods.

The goddesses too, of course. The men’s collection that Michele presents actually began with a vision of Madonna, a one-of-a-kind modern Olympian, photographed at a 1993 Lakers game in an Adidas dress by curator Laura Whitcomb, who forged a connection between the worlds. art and fashion in the early ’90s with a label called Label. Michele was fascinated that this was something that was happening on the streets and under the fashion radar years ago. And in a way, it had to do with his love of doing the wrong things the right way. Hence a men’s fashion show during women’s fashion week. “I don’t mean to break the rules because it’s nothing really specific, but I thought it was just a good time to open up the conversation about men at a time when the industry and the public usually see a different kind of show.”

There is another point that Michele particularly wants to make. As a pioneer of gender fluidity in fashion, he is increasingly appalled at how these words – along with terms like diversity and inclusiveness – have increasingly become a marketing tool, an Instagram caption for businesses, destroying the power of the words themselves. “I grew up feeling like a special boy in a different world. But everything I did had a very deep meaning. Diversity is key, but I want to feel the true meaning of words.

Michele reminds me that his first period show for Gucci in January 2015 was a men’s show and he didn’t think about “fluidity”. Now as then, he insists he still has a passion for men’s suits. “It’s something I really like. When I start a collection, I start with the suit, also with women. It’s always about the jacket and the shoulder. So I didn’t start my career by thinking of “fluidity”, never in my life. I always started with the relationship to the face, to the body. Attitude.”

Michele’s original vision became something of an industry model, dominant enough that there was a point where he felt he was about to become a prisoner of fame. This happened. Now he says he feels totally free. Free to do a men’s show during women’s fashion week. But there is so much more to a conversation with Michele. Ask him about the metaverse or the dark dawn of trendy NFT and he insists that he’s like a creature in a zoological age, halfway between land and sea. When he reflects on his career in fashion, he realizes that he grew up with Karl Lagerfeld. “And now it’s like I’m working in another era. I feel like I’m stepping out of the pyramids. I mean, I’m still touching the fabric. But I’m curious. I’m still alive because I’m such a curious animal. I want to know, I want to confuse myself. It’s like geography. You’ve never been to a place but you know things and you can put them together.

Frankly, I love Michèle’s attitude. You are in a place where you are experiencing something new, but not quite. There is always something else. I prefer the multiverse with all of its parallel worlds that are beyond the reach of your average metaversal laptop. Michele recalls his grandmother giving him a hard time for sitting in front of the TV when he could be in the garden with his six cats. Then he became allergic to cats and now he has three dogs. But he still wants cats. “I think there is always something good when there is something bad. Change has different faces. I like to be always confused, not really understanding. I always feel very ignorant in everything, between what I know and what I don’t know, and that’s a good position.

“I don’t like to define what I do,” insists Michele. “Fashion isn’t old talk anymore. I was just trying to explain to you that how I started on the show was just an accident. I was really watching Laura Whitcomb, and wondering why she had did something in the past that was so close to what we do. She didn’t know anything about collaboration, she was just commenting on popular symbols. And that’s really what we do in fashion now. And I can’t even can’t imagine a time when this story ends.