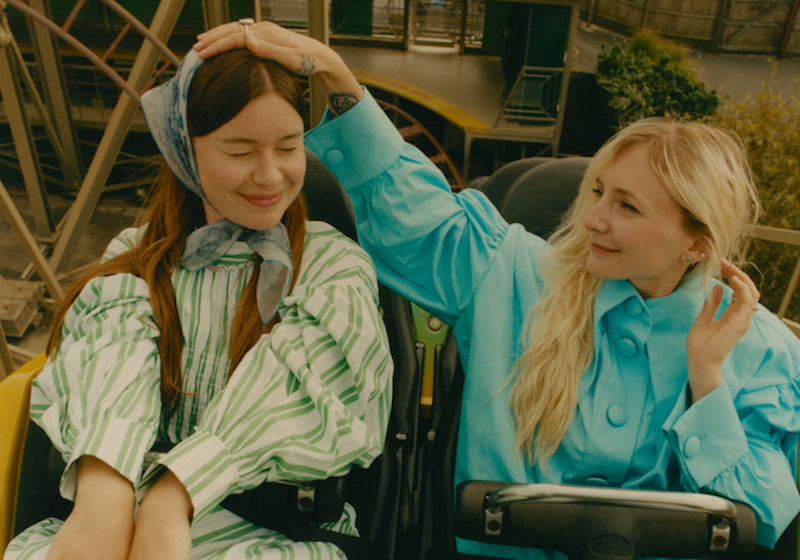 Interview: A speed date with Rhian Teasdale of Wet Leg.

“These four followers must know what I had for breakfast today!” says Wet Leg singer Rhian Teasdale, poking fun at her own social media habits with the same dry wit that has become synonymous with her particularly racy lyricism (“I don’t need a dating app to tell me if I look like shit / To tell me if I’m thin or fat, to tell me if I should shave my rat / I don’t have need radio, no MTV, no BBC / I just need a bubble bath to set me on a higher path” she spells out in the anthem of first-rate anxiety ‘Too late now’).

Today, Teasdale is in town from the back of a sold-out Auckland show and sitting in a hotel boardroom, bringing her many streams of thought together to discuss Weg Leg’s brilliant self-titled debut album, his hatred for dating apps and other important topics. of Conversation (also available in this month’s print Zine)…

HELPING HAND: After being known for hitting the stage on the song ‘Concerning Hobbits’ from the ‘Lord Of The Rings’ soundtrack, what’s it like to be here in New Zealand now?
WET LEG – RHIAN TEASDALE: It’s very frustrating because I know we’re two hours from Hobbiton, so we’re all pretty pissed off. It’s frustrating ! Above all.

CDM: But you’re coming back next year! Play a stadium with Harry Styles!
RHIAN: Apparently… crazy! It’s really hard to imagine. And imagine. Like, people say this thing is going to happen, but it’s so hard…I’ve never even been to a show in a stadium, so I don’t really know what it’s going to be like to play.

CDM: Well, we’ll be there. And we’re all going to cheer you on.
RHIAN: Yes!

CDM: You said “Being In Love” is about “how being in love isn’t very conducive to doing anything else”. Why do you think love is such an all-consuming emotion/feeling?
RHIAN: It’s really weird that we celebrate it so much and put it on a pedestal. I was reading about it, and I don’t know what you would call it because I’m not a scientist, but there have been studies where they’ve done brain scans and the patterns in your brain are similar to the patterns in them people who have conditions like OCD, so it really looks like a mental illness. It’s a bit strange.

CDM: “Piece Of Shit”, “Loving You” and “Ur Mum” are incredible songs. Is writing your way of building a new home to resent, so your exes don’t live rentless in your head?
RHIAN: That’s a very nice way of saying it. It’s so cliché to say that writing music is cathartic, but I guess so. Or maybe it’s just that time has passed too, to be fair. But it’s kind of cool to document this mental space that I was in at the time because I definitely couldn’t write a song like that now, because I’m just not mad at anybody. I’m really in love. So who knows what kind of music we’ll write for the second album.

CDM: In “Angelica”, you say aptly: “I don’t want to follow you on the gram.” People place so much importance and social value on someone following or back-following you on social media, and it’s exhausting. I also don’t like how it’s normalized that if people know what their friends did last night from their Instagram stories, they don’t feel the urge to contact them and ask how they are going.
RHIAN: Yes of course. It’s definitely something I’m guilty of doing and feeling.

CDM: What about the dating apps you hate so much?
RHIAN: So many things. Where do I start? Well, they’re constantly evolving, which is probably a good thing, out of necessity, maybe because of the sheer number of people. There is one called Thursday, where you must meet on a Thursday, otherwise your chat and contact will be deleted. I guess this one came up because so many people were chatting just to boost their egos, but when it came to meeting, they wouldn’t. So that’s a downside of apps, that people use people to give each other that…everyone wants to be wanted. It’s nice to feel wanted, but then you use people. And then also really the thing that I hate the most from my own experience of using them is that you meet someone and there would already be this prerequisite that you are interested in each other in a romantic way. So even if you get along at the end of the date, they’re still going to go for that kiss, whether the vibe is there or not, because on paper you both signed up for this thing that says: ‘I am romantically interested in you.’ But when you meet, the chemistry just might not be there.
CDM: It’s that feeling that you owe something to a stranger.
RHIAN: Yes of course.

CDM: “Before it was so fun, now everything seems stupid”, you say in “I Don’t Wanna Go Out”… How do you feel now, thinking back to this song?
RHIAN: I still feel it a bit, especially after the pandemic. I think I wrote that one during the first few weeks of the good 0.1/1.0 lockdown in the UK. I guess I was 27, and I think I got to a point in my life where going out on lashes for two days just wasn’t something I wanted to do anymore. I didn’t like where I was going. At 27, you are like: “Wow, that looks kinda grown up, I really should get my shit together.” I just didn’t have my shit together, and so it was really hard to enjoy wasting time like that because when you wasted time like that, it would sort of come out of a place like: “I’m so lost, so I’m going to be even more lost for a while so I don’t have to think about how lost I am.” And it wasn’t just me. It was also other people. I could see we were doing this and it was kind of gross.
CDM: And everyone felt a bit frozen by the pandemic – and felt like those years of their lives had been stolen from them.
RHIAN: Yeah!

CDM: ‘Mean Girls’ is obviously an important film in the Wet Leg cinematic universe. What else is recommended to watch?
RHIAN: ‘School of rock’. Highligths. I think the last time we watched it was last summer. We were in Bristol and it was me, Hester and the whole band (Joshua, Henry and Ellis). We sat down and watched it and it’s just a classic. It has aged very well; it’s really funny and really healthy.

CDM: When you make your longest and loudest cry while playing “Ur Mum” live, what goes through your mind at that moment?
RHIAN: Not much except: “Ahhhhhhhh!!!!! » Because it’s quite noisy.
CDM: Does that drown out everything else a bit?
RHIAN: Exactly. And that’s the idea, I guess, so you can’t think of anything else.
CDM: It’s your nocturnal therapy.
RHIAN: Exactly, and that’s really good because when I’m playing guitar, I can’t look at everyone, and I’m standing the whole set with my back to Henry, so it’s good to be there and shout at him in the face.

CDM: And finally… what can you tell me about the Wet Leg #2 album?
RHIAN: That hasn’t happened yet. We made a joke about album 2 in an interview, that we wrote a death metal album, then someone just took it and ran with it and now in all of our interviews we get asked if our second album is a death metal album…

Watch the music video for “Ur Mum” below…