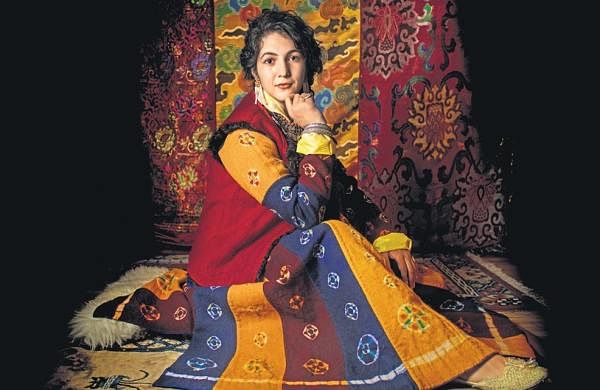 Calling themselves “cultural fashion artists” rather than fashion designers, Jigmat Norbu and Jigmet Wangmo of Leh-based Jigmat Couture base their design philosophy on the art, crafts and culture of their region.

There is a saying in Ladakh that weaving the textile is associated with fertility – the warp is the mother and the weaver inserts the weft to make the cloth, which is metaphorically the conceived child in her womb. Very fitting given that much of the economy is based on wool, considered the best in the world, boosted as it is by the intense winter cold of the windswept plateaus and high altitudes. The softest wool is used in clothing and accessories, the coarser varieties in furniture. Nothing is wasted because of the reverence for textiles – the rest of the hair removal material is used for felting.

This is the great tradition carried on by Jigmat Norbu and Jigmet Wangmo of Jigmat Couture, based in Leh. Calling themselves “cultural fashion artists” rather than fashion designers, they base their design philosophy on Ladakhi art, crafts and culture. Most designers in India and abroad produce at least three collections a year, but Jigmat Couture only makes one, using only textiles from Ladakh. Their creative process is based on an intense study of a particular region, its historicity and culture. The collection is accompanied by research on paper, drawings, oral and video recordings that form their own textile museum, giving it a gravity that elevates it above simple fashion.

The Jigmat duo studied fashion at NIFT and worked in mainstream fashion for a decade, realizing in 2010 that they could channel Ladakh’s expertise in weaving and design to create a textured, warm and durable product. . As they say, “The result was beyond expectations.” They take great pride in running a business with a conscience, one that breathes Ladakh and follows an ethical and sustainable manufacturing process.

They continue to use the traditional footed loom, back strap loom, and fixed heald loom, but as designers they innovated in silhouette and drape, making the historic contemporary and wearable. . They feel they have transformed the local wool fiber into an exceptional product that links remote Ladakh to the international luxury market. The product is free from harmful chemicals and safe for the skin and the environment. Better yet, the duo guarantees fair wages to artisans, generates local savings and recycles textile waste.

In just 10 years, Jigmat Couture has a chain of stores in Ladakh, an online presence and stocks in several international stores. But what they’re most proud of are the three projects they’re currently working on. ‘Art & Artisans’ offers training and workshops for people interested in the indigenous loom. Ladakh Textile Museum preserves Ladakhi art, crafts and culture for posterity. The craft residency project is about to end next year and should be a unique space for artists visiting Ladakh who could collaborate with Jigmat Couture.

When asked about plans for expansion, the duo characteristically say they’d rather take it slow, but experiment with furniture made on the sling loom. Attending Fashion Week, which is usually an ambition for designers, doesn’t make sense to them, as production is limited and they only produce one collection per year.

Ultimately, they hope that their entrepreneurial spirit and excellence will influence other entrepreneurs in Ladakh to promote local crafts and create employment opportunities. Changing the way India and the rest of the world look at Ladakh. They are on track to achieve this ambition.