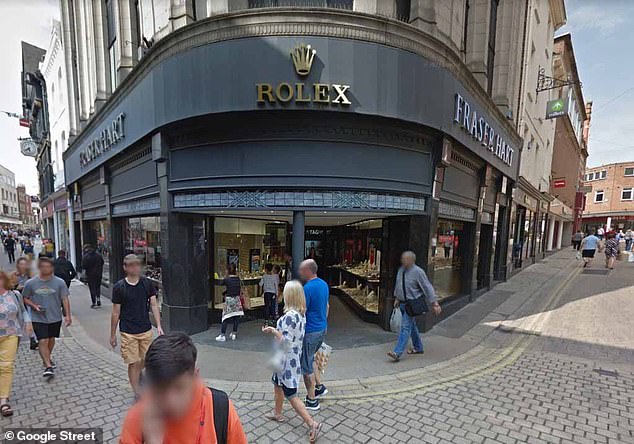 By Catrin Picton for Mailonline

A man has died following a fight with a security guard at a luxury jewelery store in York.

Sam Diatta, 39, had been restrained by Mappin & Webb staff before he died, police say.

Police were called to the upscale Coney Street store at around 4.40pm on July 26, after receiving multiple reports of a ‘disruption’, only to find Mr Diatta was unconscious.

Four men have been arrested in connection with the incident and released on bail while investigations continue.

Today lead investigator, Detective Inspector Steve Menzies of the North Yorkshire Police Major Investigation Team, said: ‘I am aware of speculation about the incident at Mappin Jewelers and Webb in York on Tuesday evening.

“This caused distress to those involved and the family of Samuel Diatta, who sadly passed away as a result of the incident.

His family left a tribute for their beloved son and brother, saying: “It has caused our family great distress to read some of the news articles online suggesting Sam was involved in a theft.”

“This is incorrect information as confirmed by North Yorkshire Police and we respectfully ask that these rumors cease.”

“Mr. Diatta entered the store and was involved in an altercation with a member of security personnel. This escalated, resulting in the staff member being injured and Mr Diatta being held to the ground by a store staff member and three members of the public.

Police received an emergency call at 4:41 p.m. and officers arrived at the jewelry store at 4:46 p.m.

Mr Diatta was found unconscious when police arrived at the scene, but he was given emergency first aid.

Police confirmed paramedics arrived and he was transferred by ambulance to York District Hospital, but was pronounced dead just after 6.40pm.

York Police said: ‘As with any unexpected death of this nature, a police investigation is required to establish the facts, establish whether or not there is criminality connected to the death and obtain answers for Mr Diatta’s family. and for those involved in the incident, and for the coroner.

His family said: “Sam was a wonderful member of our family who will be greatly missed by our friends and family around the world.

“Sam was half Senegalese and his family in Senegal meant the world to him. He was a keen sportsman and supported the English and Senegalese football teams.

“Unfortunately, in his late teens, Sam developed mental health issues that followed him throughout his life.

They called him: “A gentle giant, who was kind and generous and loved by all who met him.” He had a strong Christian faith, and together with two others he led the York College Christian Union.

“As a young teenager, he professed his faith in Jesus by being baptized at Acomb Baptist Church.

“We anticipate that his funeral service/thanksgiving will be there at a date to be announced later.”

If you witnessed the incident, please call North Yorkshire Police 101 and ask for the Major Incident Team.

If you prefer to remain anonymous, you can forward information to Crimestoppers on 0800 555 111 qciting incident number 405 of July 26.