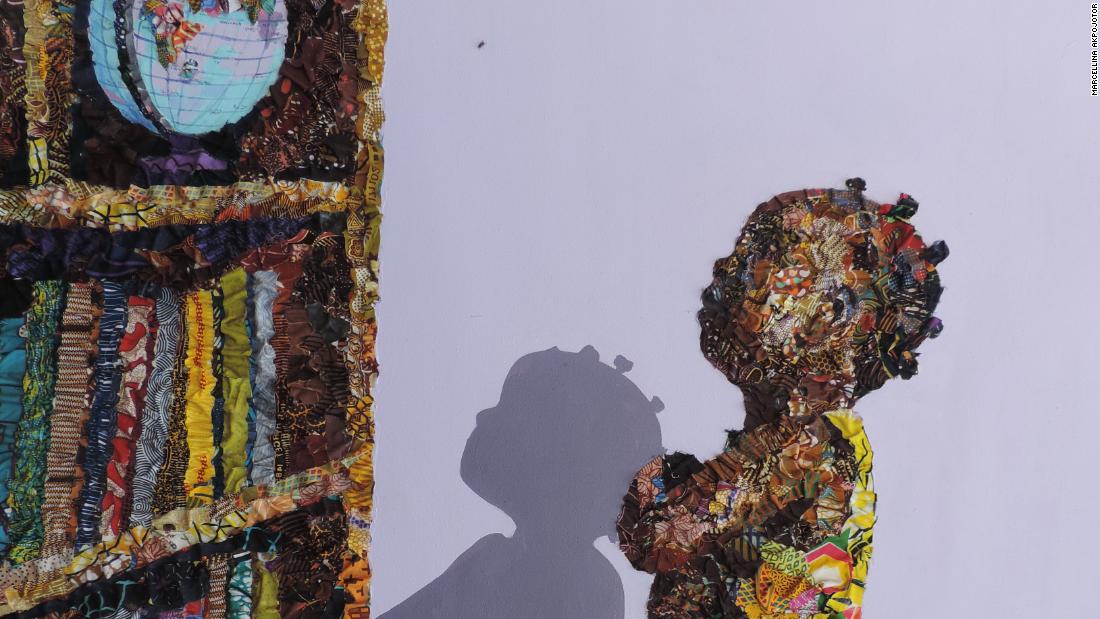 Only 10 countries in the world have a larger gender gap in education than Nigeria, with around 70% of boys in the country attending primary school, compared to just 58% of girls.

This is just one of the questions that Nigerian artist Marcellina Akpojotor addresses in her work.

She has exhibited worldwide and gained international recognition for her family portraits which combine acrylics with fabric scraps from Ankara. But behind their dynamic models, Akpojotor’s works tell a deeper story of family, femininity and female empowerment in contemporary African society.

“If she could be born again, she would ask to be educated”

Akpojotor, 33, presented a body of work at Art Basel in Miami last year titled “Ode to Beautiful Memories,” which pays homage to his community in Lagos. Comprised of eight pieces, the collection tells the story of her female family members across five generations, beginning with her late great-grandmother Dede Eboheide Anare and ending with her six-year-old daughter.

Akpojotor’s great-grandmother was a farmer who harvested cassava to sell in markets. Aspects of her life have been incorporated into Akpojotor’s work, which traces her upbringing from her great-grandmother’s time, when girls rarely attended school in Nigeria, to the present day. .

“The artwork is taken from the stories my mother told me about her,” Akpojotor said, explaining that these pieces use the reddish-brown color of the earth typical of her family’s home region.

Believing that education is a source of empowerment for girls, Akpojotor wants her great-grandmother’s story to spark conversations about women’s education in Nigeria.

“If she could be born again, she would ask to be educated, to read and write,” Akpojotor said. “There are schools everywhere you go now in Nigeria, but there are still areas where female education is weak.”

About 18.5 million children in Nigeria, mostly girls, do not have access to education, according to a UNICEF official. The UN children’s agency also estimates that less than half of all girls attend school in northern Nigeria, due to factors such as “economic barriers and socio-cultural norms and practices that discourage attendance at formal education, especially for girls”.

“Dialogue can be a tool for social change,” Akpojotor said. “It’s a proven way to gain empowerment because when you’re enlightened, you do more in society.”

“Blooming Red Soil” features the reddish-brown color of soil typical of the region where Akpojotor’s great-grandmother was from. Credit: Marcellina Akpojotor

Born and raised in Lagos, Akpojotor discovered her love for art while helping her sign-maker father with sketching, drawing and calligraphy projects. Like him, Akpojotor continued her studies in art and industrial design at Lagos State Polytechnic, where she began to formulate her signature abstract style.

Inspired by the people around her, Akpojotor began collecting old photographs from her family archives and drawing relatives to reflect their life experiences. Exploring the legacy left by previous generations has become one of the central themes of her work and has been featured in past exhibitions such as ‘She Was Not Dreaming’ and ‘Daughters of Esan’.

More than a material

Akpojotor has also become known for her use of Ankara fabric in her abstract portraits, exploring the history and significance of the material for women across Africa today.

Featuring vibrant and colorful designs, it can be found in homes and shops across West Africa. Outside the continent, the material is often seen as predominantly African, but its history is more complex.

Ankara textiles were only introduced to Africa by Dutch entrepreneurs in the 19th century, made using a method derived from a traditional Indonesian wax-dyeing technique called batik.

“It was embraced by Africa but was not originally designed for Africans,” Akpojotor said. She added that it became popular because it was mass-produced and affordable, and by incorporating the material into her art, she makes it more accessible.

Akpojotor uses Ankara fabric in all of his works, including “Dreams in Bobozi Farm”. Credit: Marcellina Akpojotor

As part of her creative process, Akpojotor scours Lagos, scavenging scraps of Ankara fabric from local fashion houses. She says it adds an extra story to her pieces as each fabric has its own journey and origin before reaching her hands.

“I borrow things from my past and incorporate them into my work,” she said, “and I think that makes it unique.”

Akpojotor says the fabric of Ankara, themes of women’s empowerment and social issues will continue to be integrated into her work as she hopes to further engage audiences with stories of ancestry and memory.

“I want people to be inspired to look at their lives and the lives of others around them,” she said.

Innovators Awards 2022: The Do’s and Don’ts for a Quality Nomination