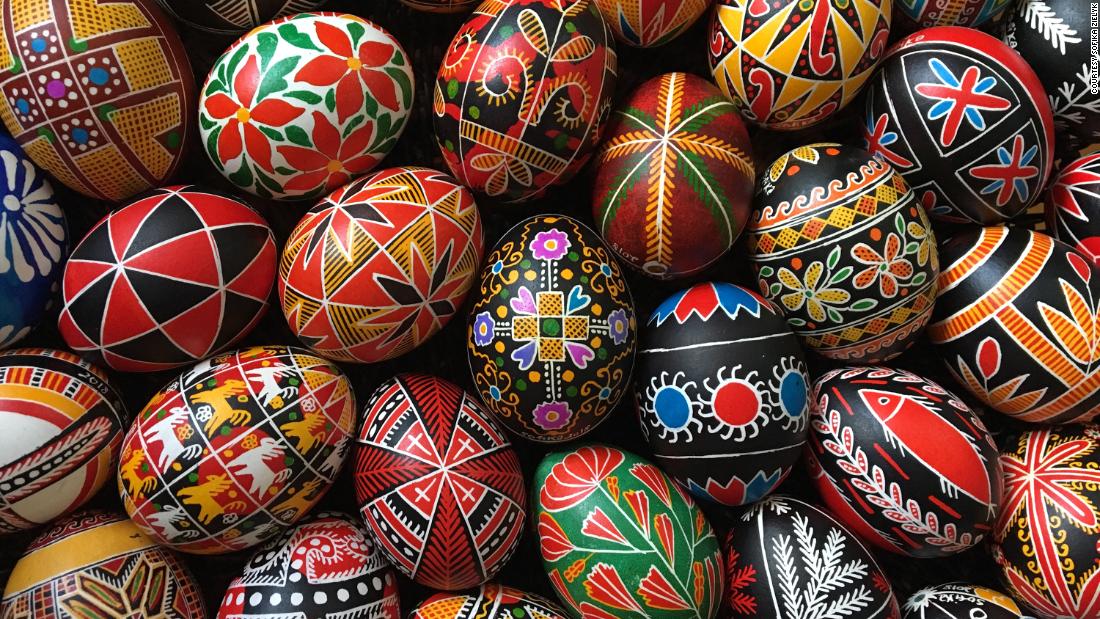 By Kevin R. Manson Last updated Apr 17, 2022
Share
The art of creating pysanky dates back centuries: designs are applied with a stylus to an egg with melted beeswax. The egg is repeatedly dipped in colored dye as the design becomes more and more intricate. What emerges is a fragile and exquisite work of art.
An array of styles found in pysanky can be seen in the photos accompanying this article. A pysanky exhibit sent to Zieklyk by Ukrainians around the world is currently on display at the Ukrainian Institute of America in New York. CNN told him about the art and cultural significance of pysanky making. This interview has been lightly edited for clarity.

CNN: How did you start creating pysanky?

Sofika Zielyk: My two sisters, my parents and I lived in a small apartment in New York [when I was growing up]. As I fell asleep at night, I watched my mother do pysanky. Everything was dark except for the candle flame, which you need to create these eggs because you have to melt the wax on the flame.

It was so mystical and so beautiful. I was about five years old. I asked my mother if I could create a pysanky. I remember sitting on her lap and she helped me hold the stylus. My first egg had little dots, lines and stars. And that’s how I started.

This is an extremely old tradition that originated in Ukraine and has been passed down through the centuries, from mother to daughter. Pysanka is the symbol of rebirth.

I always made them during the Easter season, and eventually a hobby turned into a profession. When I started researching the tradition, I realized it was just more than pretty decorated eggs. It has a history of an entire nation.

CNN: What is the significance of this art form today, as Russia attempts to destroy ukrainian culture?

The annihilation of Ukrainian culture has been going on for [centuries]. Whether it is the Russian Empire, the Soviet Union or the Russian Federation, it is the same aggressor and they have the same objective.

These eggs were thrown in pre-Christian times as a springtime ritual to bring back the sun after a long winter. People chose an egg as a gift to the sun, because the yolk reminded them of the sun. They thought that if they held the egg in the palm of their hand, they could harness some of the power of the sun. Also, the rooster comes out of the chicken egg, and the rooster was the creature chosen by the sun god, because when the rooster crows, the sun comes out.

So people gave an egg as a gift, but they also included tribute symbols and prayer symbols in hopes that the sun god would grant their wishes. These pagan beliefs were adapted to Christianity. It was no longer the sun god returning from a long winter, but the resurrection of Christ from the dead.

CNN: How did the tradition come to this country?

Zielyk: At the end of the 19th and the beginning of the 20th century, people migrated to different countries from Ukraine. And then, right after World War II, refugees arrived in the United States. And two of those refugees were my parents. I am a very proud first generation American girl of Ukrainian refugees. My parents and their parents fled the Nazis and the Soviets.

People thought Ukraine wouldn’t exist. Or that it would be swallowed up by the Soviet Union – which it was. But they continued to practice their customs and traditions.

Immigrants and refugees, who came from Ukraine to different countries, brought this tradition with them. And it was here in the Diaspora that it was for custody. And he was kept safe and he thrived here.

CNN: The images of destruction in Ukraine are heartbreaking. But you seem optimistic about its resurgence from the ruins.

Zielyk: When the war broke out, I was in shock. I was in disbelief, sadness – then anger set in and I felt I had to do something. I realized that pysanky and cultural diplomacy is my weapon.

So I made a call to social media and asked anyone of Ukrainian descent – ​​anyone interested – to create a pysanky and send it to the Ukrainian Institute. And it’s a constantly changing setup as more and more eggs arrive every day from all over the world.

It is the ancestral, primordial, symbolic response to the aggressor. It’s our way of saying we’re here, we’ve been here for centuries and we’re not going anywhere.

CNN: What will become of all those eggs once the exhibit is over?

Zielyk: At the end of the war, all the eggs from all over the world will be transported to Ukraine. Because the egg is a symbol of rebirth, they will symbolically aid in rebirth.

The pysanky will be buried in the ground of all the cities that have been destroyed so that we can help in the delicate, humble, but immensely powerful task of rebuilding.