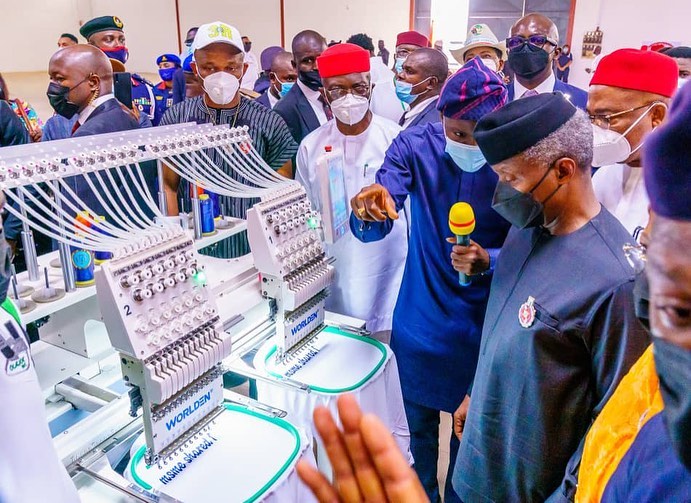 The federal government on Tuesday unveiled a modern multi-million naira facility in Owerri to assist tailors and fashion designers in the production of clothing and clothing items.

Unveiling the facility at the 29th edition of the Micro, Small and Medium Enterprises (MSME) Clinic in Owerri, Vice President Yemi Osinbajo said it will improve the quality of locally produced clothing.

â€œIt will serve approximately 350 small businesses per day and over 110,000 each year. It includes 200 world-class fashion equipment, both manual and fully automated.

â€œIt has a special facility that allows it to become a one-stop garment center for the end-to-end production of various types of garments,â€ he said.

He said President Muhammadu Buhari prioritizes MSMEs “because they are the engine of economic growth and because they account for almost half of national income and a large part of the jobs created in the economy. country “.

The vice president explained that the MSME clinic was an opportunity for small businesses to meet with regulatory bodies such as NAFDAC, SON, CAC, SMEDAN and BOI, among others.

â€œDuring the operation of the clinic, we noticed that in addition to their request for a user-friendly environment, the MSMEs also wanted to be supported in terms of missing or expensive production tools.

“This is how the president supported the idea of â€‹â€‹providing at least one shared facility in each state,” he explained.

The vice president said 10 such facilities were established this year in the states to complement those previously inaugurated in Anambra, Benue and Lagos.

He revealed that Edo, Kaduna, Kebbi, Ogun, Ebonyi, Katsina, Ekiti, Bauchi and Kano also shared facilities that would be inaugurated in 2022.

Earlier, state governor Hope Uzodinma said the project was the fulfillment of all three components of his administration’s shared prosperity agenda.

“That is why I cannot thank President Muhammadu Buhari and his team enough for the creative enterprise expressed in the MSME program,” he said.

The governor explained that the installation was a collaborative endeavor between the federal governments and Imo, and some private sector partners.

He said the cardinal goal of the project was to empower young men and women, as well as help eradicate poverty in the state.

â€œThe state is slowly and steadily restoring its lost glory of being the industrial center of the Southeast.

â€œThe state government has started reviving and taking over all the dying industries built by the late Sam Mbakwe,â€ he said.

He urged investors to take advantage of tax exemptions, the provision of electricity on gas, the ease of doing business and other incentives to invest in the state.

Good journalism is expensive. Yet only good journalism can guarantee the possibility of a good society, responsible democracy and transparent government.

For free and ongoing access to the best investigative journalism in the country, we ask that you consider modestly supporting this noble enterprise.

By contributing to PREMIUM TIMES, you are helping to maintain relevant journalism and ensure that it remains free and accessible to everyone.