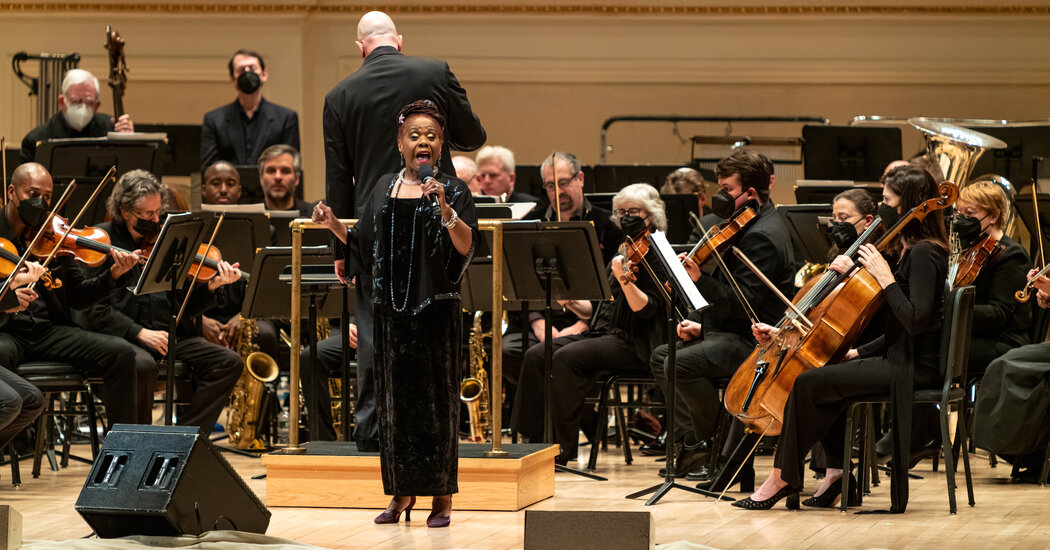 Review: An Orchestra Manages to Capture That Ellington Swing

What should the great American orchestras of the genius of Duke Ellington do? Should they program his music in pop concerts, or on their main classical series?

And when they play it, which of the messy maze of editions of his symphonic pieces should they use? Will they need to hire soners from the jazz world to play solo parts?

Many large ensembles avoid Ellington altogether or marginalize him: the New York Philharmonic, for example, tends to play his works at community events or youth concerts, but only occasionally as part of its subscription season.

While Ellington’s legacy hasn’t really suffered, given his vast catalog of recordings and worthy renditions of jazz bands past and present, there is still ambiguity about how his orchestral music – a body of work he created alongside his jazz band compositions – must sound and be presented.

So give conductor Leon Botstein and his American Symphony Orchestra credit for their bravery as he and his musicians performed an Ellington concert at Carnegie Hall on Thursday.

The program was hardly a surprise: essentially a mixture of selections from the 1960s album “The Symphonic Ellington” and pieces from the later recording of conductor and arranger Maurice Peress with the American Composers Orchestra. . (While Ellington’s best music fulfills his own ambitions of being “out of category,” Peress’s arrangements can sound more syrupy, with a mid-twentieth-century “pop” orchestral sound.)

But in a smart move, Botstein also brought in pianist Marcus Roberts’ trio for the second half, which gave the evening a sense of occasion — and, at times, new insight.

Was it a no-fault, judged alongside recordings that included Ellington as a participant? No, although that is a high bar. The rendition of the first movement of “Black, Brown and Beige” (in Peress’s arrangement) was full of throatiness but not perfectly balanced – the strings were steeped in a way that dulled the bluesy feel, especially during the lively and complex finish.

I remain convinced that orchestras should learn and play something closer to the original version of “Beige” that Ellington created with his leaner orchestra at Carnegie Hall in 1943. (That notion isn’t so far-fetched at a when conservatory graduates move between jazz and classical styles with greater ease than ever.)

An equally heavy set of strings first threatened to bog down Thursday’s performance of “Harlem” (in Peress’s arrangement with Luther Henderson). But halfway through, a few graceful descending patterns in the winds aided a delicate and moving interplay between a pair of exposed clarinets. Later, when the strings came back with a vengeance, they enhanced the shine instead of erasing the color.

It was a turning point for the concert, which grew stronger as it went on. Before intermission, the take of “Night Creature” – once again in Peress’ arrangement – exuded brassy confidence. (A recording of Ellington’s 1955 premiere of the piece at Carnegie, with the Symphony of the Air Orchestra, can be found online.)

After the intermission, Roberts, the pianist, took the stage with bassist Rodney Jordan and drummer Jason Marsalis. The trio played a short, snappy set of Ellington tunes – without an orchestra but with vocalist Catherine Russell, who had previously been heard with the American Symphony in a somewhat muted version of “Satin Doll”.

Speaking from the stage, Roberts encouraged the audience to listen to the music as if it was written “last week”. A tempo-changing version of “Mood Indigo” brought that point home nicely. Russell was properly introduced during the set; his improvised exclamations at the end of “It Don’t Mean a Thing (if It Ain’t Got that Swing)” drew a mighty and deserved standing ovation.

When the orchestra returned to join Roberts’ trio, it seemed swept up in energy. Importantly, “New World A-Comin'” (arranged by Peress) and “Three Black Kings” (completed by Mercer Ellington and arranged by Henderson) featured new piano solos arranged by Roberts. His playing—often denser than Ellington’s—helped establish a new way of hearing this music, outside of the menacing shadow of its creator. Marsalis’ drumming also had an individual character, especially during “Three Black Kings”. (At one point, he made a simple-sounding pattern that gradually became complex in his syncopations, until he stirred the crowd to applause.)

The commitment of Botstein and his players was gratifying. And as usual with this conductor, there was an educational aspect to the process. A lingering question: Why is Ellington still a relative symphonic rarity?

In some places it is not. One of the best streaming gigs I’ve seen during the pandemic came from the Cincinnati Symphony Orchestra, which played a cheerful version of Ellington’s “Night Creature” (transcription by David Berger) in a program that also included music by Copland and Gabriella Smith and a premiere by Christopher Cerrone. I also have fond memories of a Schoenberg Ensemble album in which John Adams conducted Ellington’s spellbinding “The Tattooed Bride” alongside his own “Scratchband.”

So, putting Ellington back in his rightful place, at the heart of the American classical music canon, can be done successfully. Other bands coming to Carnegie would do well to remember that.

Gucci made clothes for NFTs and investors are paying thousands