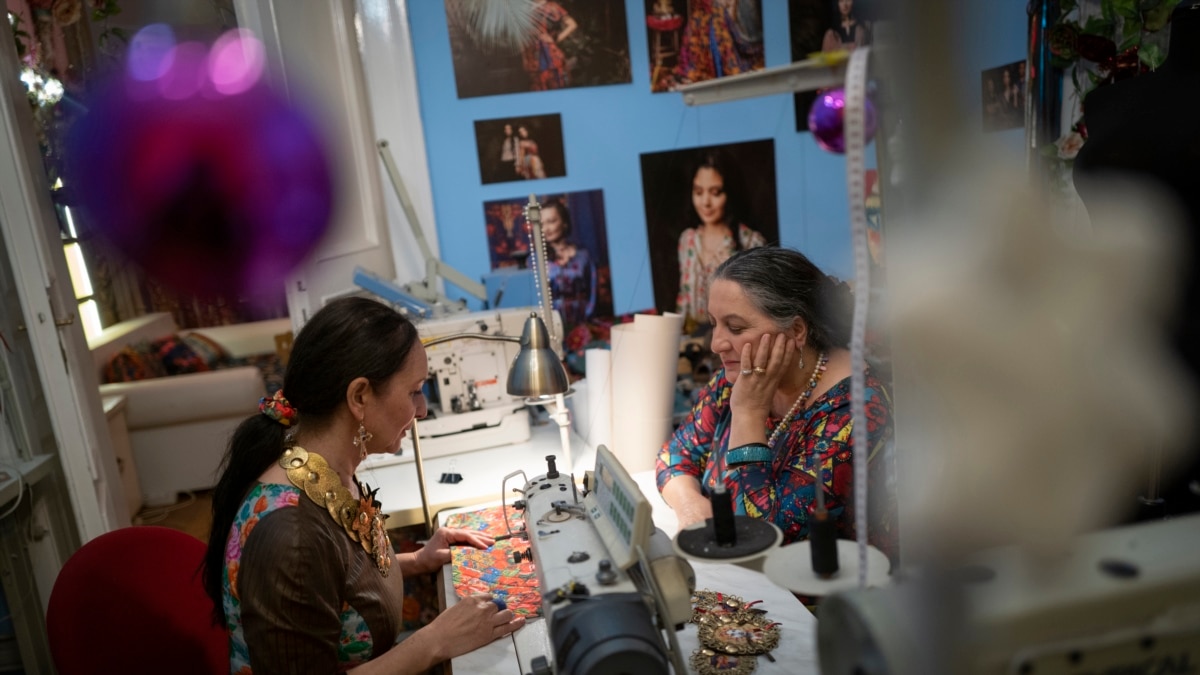 A fashion company in Hungary wants challenge secular ideas about the country’s Roma minority. Another objective of the company, Romani Design, is to make a place for itself in the world of haute couture for this marginalized group.

In 2010, when Erika and Helena Varga created Romani Design, their goals were clear. They want to use fashion and other arts to strengthen the social and cultural status of the Roma community. They also want to restore Roma culture in modern terms.

The two sisters spoke with the Associated press in Hungary.

â€œWe were one of the first brands which in fact gave the answer to how to rebuild (roma) traditions in a contemporary, in a modern way, â€said Erika Varga, co-founder of Romani Design.

The Roma are the largest minority in Hungary. They represent up to 10 percent of the population of the central European country. Like other Roma across Europe, Roma in Hungary often do not have the same social and economic opportunities as others. They also face discrimination, segregation, and poverty.

Present in Hungary since the 15th century, many Roma traditions are deeply rooted in Hungarian culture at large. Yet many of their customs, professions and languages â€‹â€‹are slowly dying out due to centuries of formal and informal marginalization.

Before launching Romani Design, the Varga sisters worked as jewelry designers. But they said they still didn’t feel accepted in mainstream society. Their work was not accepted in the world of high culture. They also feared that valuable Roma traditions would be lost.

Erika Varga said that she wanted the social majority to get used to the Roma as part of the community and of high culture. She said it was important because those with high social standing in Hungary often decide, in her own words, “who is valuable and what position they can occupy in the social structure”.

Erika added: “We also wanted to communicate messages to our own community that we should not abandon our traditional values.”

Romani Design creates clothes, jewelry and accessories which show Roma culture in a modern way. They use a lot of flowers and colors. And images of the Virgin Mary are common in traditional Roma clothing and ancient stories.

Helena Varga oversees the design of their products. She said a lot of dresses and accessories – like jewelry, bags and belts – show their experiences growing up Roma in Hungary.

â€œWhen I design, I absolutely live my own gypsy identity, and my roots are absolutely there in my heart and soul,â€ she said.

The term â€œGypsyâ€ for Roma is considered an insult in some places. However, it is commonly used by Roma in Hungary as well as by Roma living in other places.

â€œI saw how (Roma communities) live, what they wear, what types of houses they live in …â€ Helena thinks about these memories and experiences when she designs something.

Some human rights groups in Hungary are pushing for the acceptance of Roma music and dance. However, the Varga sisters say that fashion is one of the most powerful ways to change the relationship between their culture and the rest of society.

â€œFashion – the way we dress, the clothes we wear on our bodies – can send a message so fast and so intense that it reaches its target audience very, very quickly,â€ Helena said. â€œIt’s very effective.

Most of the people who buy from Romani Designs are â€œpeople who want more fashion,â€ Erika said. She explained that they want to “represent values â€‹â€‹that are important in their personal life and their community, such as the values â€‹â€‹of multiculturalism”.

Six dresses by Romani Design are exhibited in a exposure at the Museum of Applied Arts in the Hungarian capital, Budapest. After being exhibited, the new contemporary works will become part of the museum’s permanent collection. This will ensure their place for others to see and consider for generations to come.

Judit Horvath is the head of the museum’s contemporary design department. She says it’s the museum’s mission to shape social issues. The appearance of Romani Design in the exhibition, she said, was successful.

Horvath said that in the exhibit the social issues the museum wants to show are clear. “What is this problem?” The conflict, the fear, discord and the anger that often exists between Roma and non-Roma communities, â€she said,â€œâ€¦ things that we wish were not there.

I am Caty Weaver.

Justin Spike reported this story to The Associated Press. Anna Matteo adapted it for VOA Learning English. Susan Shand was the editor.

Words in this story

challenge – v. say or show that (something) may not be true, correct, or legal

marginalize – v. putting or keeping (someone) in a powerless or unimportant position within a society or group

Brand – not. a category of products which are all manufactured by a particular company and all have a particular name

contemporary – adj. alive or occurring at the same time

segregation – not. the practice or policy of separating a race, class or group from the rest of society

accessory – not. an object or device which is not in itself necessary but which adds to the beauty or usefulness of something else

exposure – not. an event where objects (such as works of art) are displayed in a public space for people to view : a public show of something