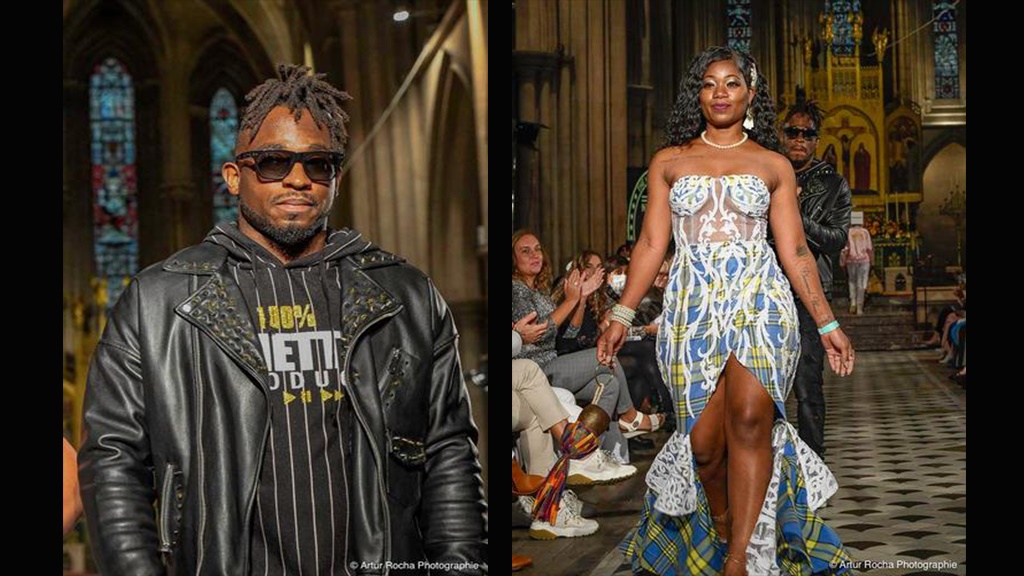 Paris City Fashion Week is the epicenter of fashion, bringing together all of the biggest names in the industry to show off their latest designs. So, for a designer, being able to share this scene with famous fashion icons is a dream come true.

This year, Marshall Celestin, designer of St Lucian and owner of NGU Clothing, had the honor of being the only designer from the Caribbean to grace one of the world’s biggest fashion scenes at Paris Fashion Week.

Motivational brand NGU (Never Give Up Clothing) received the invitation earlier this year and teamed up with another designer from St Lucian Shontell, Haute Couture fashion to launch their new clothing line â€œThe Ghetto Productâ€ which was inspired by Marshall’s humble upbringing.

â€œThe Ghetto product collection was inspired by my upbringing; we were brought up in poverty. I grew up in the ghetto and as we know there is this stigma of people in the ghetto, however, the ghetto is full of talent and inspiration and that is what this clothing line seeks to represent. The Ghetto product line wouldn’t be complete without the House of Shontelle collection. She completed the collection with her pieces, handbags and accessories. I also dedicate this collection to my brother Malcolm Celestin who was shot. May his soul RIP. ”

Charged with representing the Caribbean in such a huge way, NGU and Shontell definitely made a statement with their stunning pieces inspired by Madras and Saint Lucia, dazzling even the best fashion designers in the world.

Shontell, who has worked with NGU Clothing before, including at New York Fashion Week, described the experience as magical and a dream come true.

â€œHaving the opportunity to be on stage in one of the world’s leading fashion capitals (Paris), among other incredible designers, was a dream come true. Walking down the aisle of the cathedral was so magical and angelic. Being behind the scenes among other amazing worlds – from renowned designers; to hair and makeup setup, and even to media and photographic coverage; everything has been taken into account in depth and certainly will be motivation and a springboard for SHONTELL.â£â£ ”

The Ghetto product line was not only striking, but the blend of music with Caribbean flavors sung by Saint Lucian artist Fontelio, Jamaican Ambassador Ginger and produced by Sherwin ‘Dupes’ Brice, really set the tone for bring out the range.

In addition to its eye-catching clothing line, NGU Clothing has launched one of its luxury shoe lines, which will be available early next year.

â€œThis new line of shoes is a luxury product and it will bring us up to the level of Gucci, Louis Vuitton. So we are trying to put it in that category. What we want to represent is a top luxury shoe. range so when you wear this shoe you feel luxurious. We also want to get into the sneaker aspect so by next year we will be presenting our unisex sneakers line for men, women and kids. From here at the end of the year, we should publish a preview. ”

NGU Clothing has already secured their invitation to Paris Fashion Week 2022. However, they have also received invitations from Milan and London Fashion Week, so they are actively deciding which milestone they would like to honor for next year.

The Ghetto product line is slated for release in mid-November in New York City, Manhattan, Brooklyn and, hopefully, Texas and St. Lucia.

Marshall would like to express his gratitude to everyone who contributed to the success of Paris Fashion Week including the Association St Lucia Ottawa, Alex Eloise, Team NGU, Loop St Lucia in particular Sharine Joseph, Erv Graphics, Fab UK TV , CHUO FM, Hitz FM St Lucia, DJ Hypnotic, DJ Mikey at SBS 101.9FM St Lucia, Brand Ambassadors and everyone who has contributed to GoFund Me and made private donations.