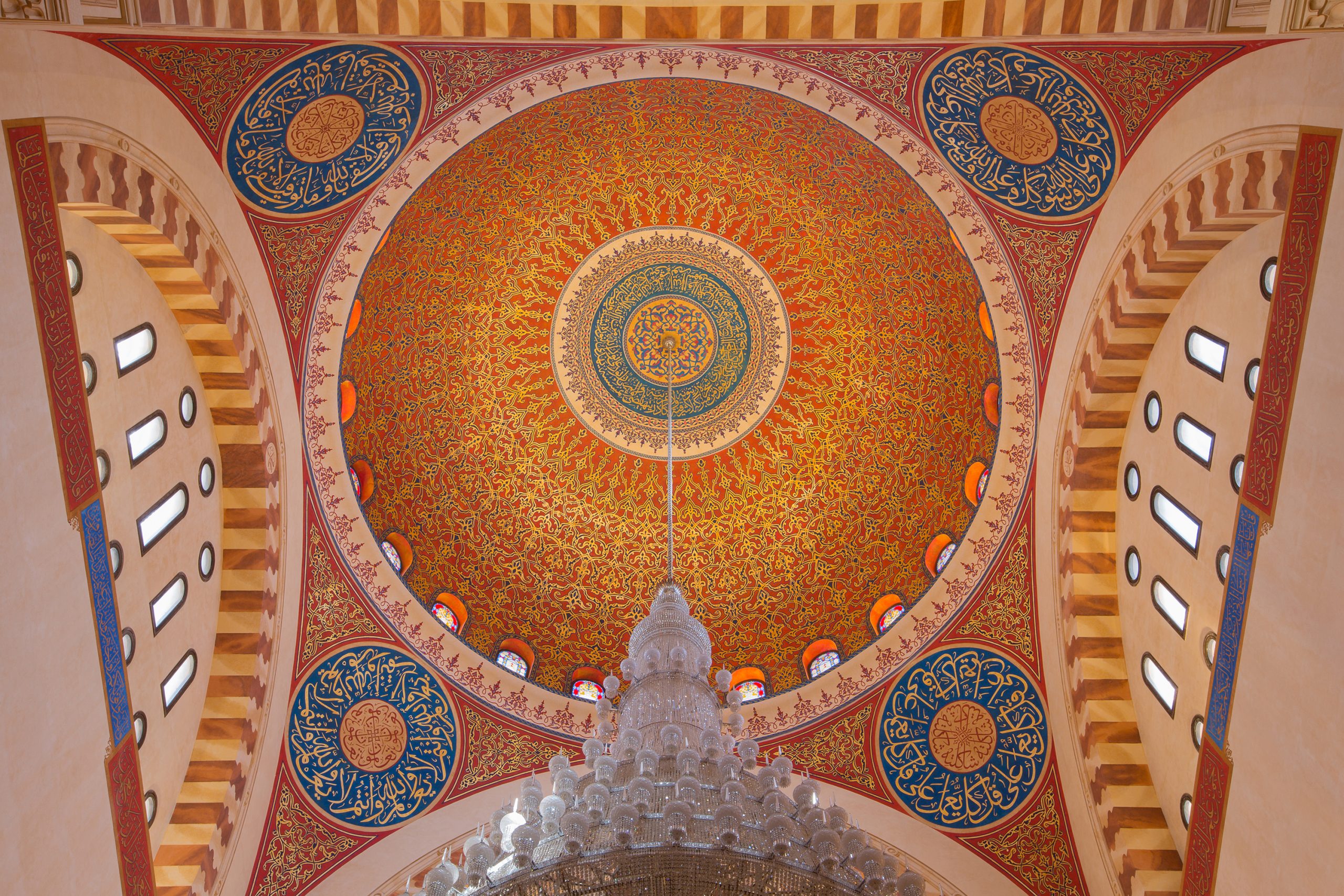 The art of painting divine domes

In the center of downtown Beirut is the eminent Mohammad al-Amin mosque, the largest mosque in Lebanon. The magnificent building, which opened in 2008, is often the backdrop for local protests that gather in the adjacent Martyrs’ Square. Inside is a beautiful painted dome. It is the work of an artist who has earned a reputation as a leading decorative ornamental painter, especially in mosques. What may surprise many people unaware of the rich cosmopolitan tradition of Islamic religious art is that the artist, Harout Bastajian, is not himself a Muslim. When people ask him how a Christian creates the decorative program of a mosque, he likes to answer: “God works in mysterious ways, brings us all together to decorate his house of worship”.

He embarked on this artistic path in 2004, when he was invited by the Hariris, a prominent business and political family in Lebanon, to decorate the newly inaugurated Hariri Mosque in Sidon, Lebanon – a structure built by the late Lebanese Prime Minister Rafiq Hariri. in memory of his father. He had previously worked on the family’s villas, and 20-year-old Bastajian’s work clearly impressed the Hariris, so they struck a deal.

The journey of painting in sacred spaces has been a source of inspiration for the artist. Not only did he paint the interior of mosques, but he also participated in the restoration of Roman Catholic and Armenian buildings in Lebanon. He well remembers his first order for a mosque in Sidon. “When I walked in and saw the huge dome, which is about 900 square meters [roughly 9,687 square feet], I couldn’t sleep that night. I thought, ‘How am I supposed to do this?’ And then I was playing basketball in my garden. I saw the basketball, the shape, how it’s split. So I started thinking, how can I split the dome and try to manage it? And it was easy. In two months, I was able to complete the project with my team,” he explains.

“When it comes to design, of course, I go through history, through different schools, and I try to find something that’s sort of contemporary and work on it. And I’ll always use the number of gold as a fundamental for my work. When it comes to colors, I don’t see just one color. I always work with layers of colors in order to achieve that depth of color, the decorative finish, and give that aesthetic end result.

He currently has a team of six or seven colleagues who work with him full-time, and a graphic designer who helps organize the project plan because Bastajian doesn’t like working with digital tools – and he appreciates help with tuning end his ideas and ordering the overall program. He uses synthetic-based paint, and the inner layers of the domes are almost always gypsum, so he often paints on that surface. He offers a 25-year guarantee that the colors he uses won’t chip, and he says he spends a lot of time making sure his paint is of the highest quality.

Over the past 18 years, Bastajian says, he has painted 37 and a half full domes, translating into more than a dozen mosques and numerous secular projects as far afield as Nigeria, UAE, Arabia Saudi Arabia, Kuwait and Switzerland.

“Well, when I did my first mosques, I had to travel a lot and check other mosques in order to understand all this better. Then I took courses in Islamic design and Islamic art… [and] after a while he became a part of me. I can only see the final result by making the sketches and preparing the drawings… I don’t like doing the same thing, or repeating the same thing that I have already done. I only repeat the same Quranic verses, which I have to do, but as for the design and the colors, I don’t like the repetition…. [Looking at my work] you can see that none of the domes look like the others; they are all different.

He designs each project from ground level, where visitors will experience the work, incorporating a mix of geometric designs, as well as vegetal and floral motifs, to create a rich web of patterns. “The shape of the dome itself, there’s something divine about it because it’s circular. There is no beginning or end,” says Bastajian. “And the light that comes from the windows, they call it the light of God. The dome itself, you can feel it flying, it’s something divine.

This symbolism is important for the artist, who sometimes draws inspiration from other works, such as the drawings of the Topkapi Palace in Istanbul, which influenced his work for the al-Amin Beirut mosque. It adjusts designs according to sect: Ottoman designs tend to work best for Sunni spaces, while Shia sacred spaces tend to draw aesthetically from Persian-influenced styles and geometry. But it’s hard to characterize Bastajian’s work as one thing, as he relishes the hybrid nature of today’s culture.

Transforming the fabric of our daily lives