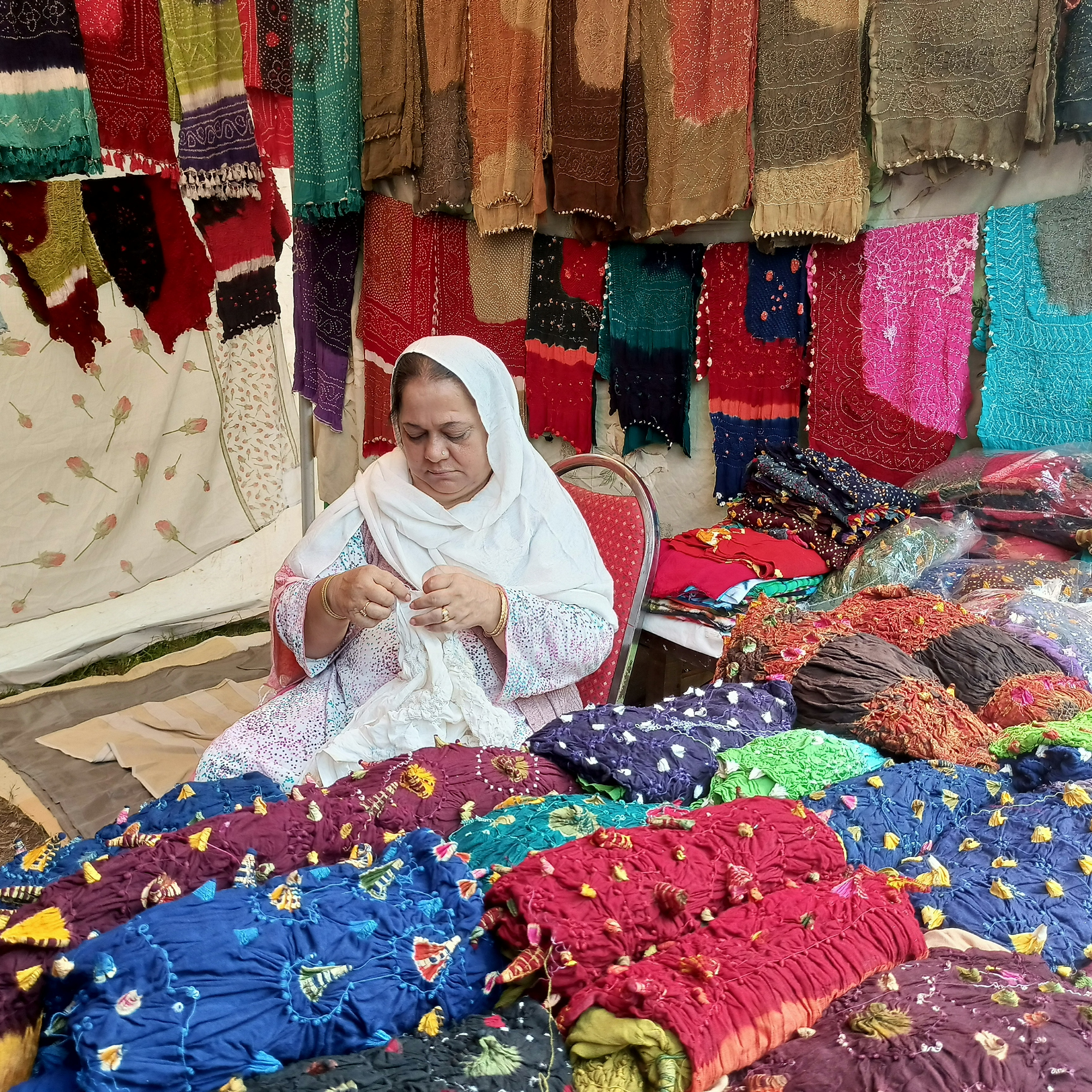 The evergreen chunri and a master craftsman who makes them

Trends and styles are constantly changing, but one item of clothing, the chunri, continues to have enduring appeal among Pakistani women. Chunri styles are often brightly colored, with recognizable geometric patterns created on dyed fabric. This 5,000-year-old craft is worn by women of all social classes and made in localities as small as Kahror Pakka, a tehsil in southern Punjab.

Suraya Abdullah, a master craftsman from Kahror Pakka, said he has seen the enduring popularity of chunri over the years among Pakistani women of all ages. Abdullah, 55, has been involved in chunri-making for decades and talks about the style as a touchstone of fashion in Pakistan.

Abdullah began helping his father make chunri as a teenager and took over his business when he passed away shortly thereafter. As the eldest child in his family, Abdullah was responsible for supporting his siblings and his widowed mother. In Kahror Pakka, the area where she grew up, education levels were low and traditional customs were highly valued.

Early in her work, Abdullah said community members spoke poorly of her because she went against tradition as a young woman working outside the home. Instead of being discouraged by these feelings, Abdullah continued to work with the support of his younger brothers.

Over the next four decades, Abdullah became a master of the craft, earning wide recognition for his designs. At the National Institute of Folk and Traditional Heritage (NIFTH) in Islamabad last year, a large crowd of women gathered around its booth, admiring colorful chunri costumes, dupattas and saris. Abdullah’s booth in NIFTH’s Punjab pavilion was decorated with colorful and stylish chunri dresses, which she says are an important part of Pakistan’s creative industry.

Abdullah has also set up a booth at the annual Folk Heritage Festival since 1990, where she exhibits her Chunri work. Abdullah said his hand-designed chunri clothes, dupattas and sarees are popular in different parts of Pakistan, especially Lahore and Faisalabad. She has also won several awards for her designs and her dedication to preserving the tradition of chunri making.

Abdullah said finding a balance between technology and routine is difficult but essential for artisans who produce traditional crafts. She encourages other artisans to adapt to advances in technology and culture to keep the tradition alive. “The first step must be taken for artisans who are far behind,” she said. “There is nothing more dangerous for an economy than for a large part of its population to ignore technological and social development.”

Chunri is originally a product of Sindhi culture, but the style is also produced in parts of Punjab. The style is made from plain fabric, which is tied to create different shapes after the material is dyed. The knotted fabric is left to dry for a few days. Artisans remove the ties from the fabric one by one once it is dry, creating beautiful patterns on the fabric. Abdullah said the work done on the cotton fabric is more durable and comfortable. However, due to the high cost of cotton, some people substitute other types of fabrics.

Abdullah said the chunri can be worn casually and for formal occasions. She said some women even wear chunri as their bridal attire for their mehndi functions. Chunri was previously made using only three colors, but Abdullah said chunri dresses now come in six different colors. She said chunri patterns are sometimes paired with churidar pants and pajamas to add an extra pop of style and color.

She recalls a training workshop a few years ago when a master craftsman from Bangladesh came to train artists in chunri work and taught three-color designs. After that, Abdullah said she started designing dresses and dupattas in six colors, including green, orange, blue and indigo.

Pakistani craftsmanship has always had great cultural significance. But for a long time, the sale of these products was limited to the domestic market. According to a 2017 report by the World Bank, only 0.5% of the world’s handicrafts are made up of Pakistani products.

Although the craft is recognized for its cultural significance, many traditional styles have been abandoned in favor of other forms of production because they are faster and cheaper to produce.

There has been a resurgence of interest in traditional crafts in recent years, facilitated by social media which has enabled local artisans to connect with buyers in different countries. Local initiatives have attempted to revive the craft market by marketing the products to a wider audience. Social enterprises and NGOs have endeavored to use these platforms to give local artisans more opportunities to profit from their work.

Although social media marketing helped increase the reach of some products, the businesses were mostly run by individuals and not supported by the government as a tool for development or cultural preservation. As a result, economic benefits have been largely limited to certain groups. These initiatives have primarily focused on creating a platform for traditional products, but not necessarily on finding ways for these crafts to evolve within local communities.

Social enterprises also often market products at higher than normal prices in national markets, limiting their reach to people in certain income brackets. Due to increased demand, these initiatives often also focus on environmental sustainability. Some initiatives also aim to educate local artisans about creating online businesses, but this market is still developing.

Although chunri garments are available in markets in different parts of Pakistan, the industry has not grown much over the years. Talha Ali Kushvaha, the former executive director of NIFTH, said Pakistan can generate millions of dollars through its rich creative industry. But the government’s lack of interest is one of the brakes on this growth. Unlike other countries that invest heavily in their creative industries, Kushvaha said opportunities for Pakistani creativity are largely limited to events like the annual Loke Mela (folk festival).

Another factor in the stagnation of crafts is the inability of the industry to adapt to the needs of modern times. Abdullah said she wanted to transform this industry to help it have more reach, but lacked the capital to invest in this plan. She believes that such an investment would help individual artisans and the national economy if someone else was willing to contribute. “We have great designers, artisans, traditional brands, artists and architects, adding that we can empower the creative sector and add a whole new sector to the workforce,” she said.

Abdullah speaks of her family’s heritage and her culture with pride and affection, even if it is both sweet and bitter for her. She has taught the art of chunri making to most of the women in her villages who develop their skills both as a hobby and to earn money.

“We must help the backward classes to improve their lives,” Abdullah said. “There are millions of people here in this country who belong to creative work, and they need to increase their income.”