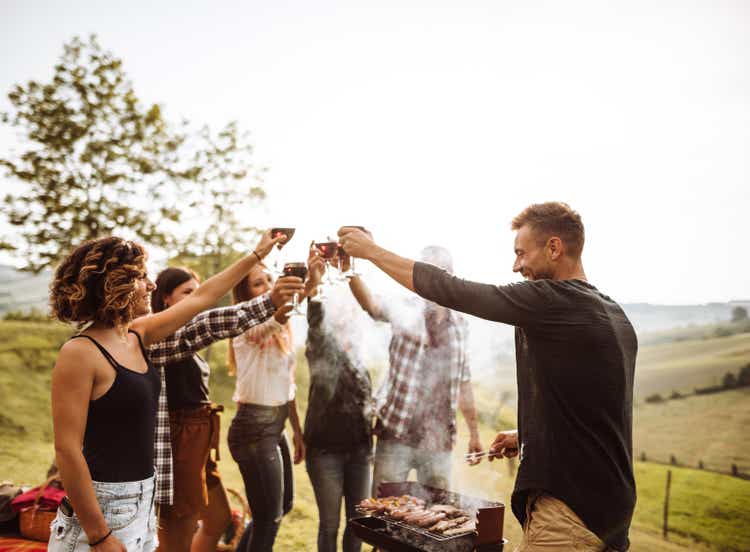 Traeger: What it could be worth to a potential buyer (NYSE: COOK)

Traeger, Inc. (NYSE: COOK) is one of many companies that led the 2021 speculative market to a successful IPO.

Although Traeger’s overall financial results were disappointing, they primarily reflect an inflated SG&A cost structure. Traeger may be attractive to an acquirer who can extract over $100 million in synergies with SG&A alone. Traeger may be an interesting name to consider for a potential sale, although investors should be aware of the heavy debt burden.

Traeger, for those unfamiliar, is the creator and category leader of the premium wood pellet grill. Wood pellet grills use hardwood pellets as fuel for grilling and broiling foods, adding a wood-fired flavor to foods that gas, charcoal, and electric grills cannot replicate.

Traeger generates revenue from the sale of grills (59% of Q2 revenue), accessories such as grill covers (20% of revenue) and consumables such as wood pellets (21% of revenue). ‘business).

Stock has been a disaster since IPO

Traeger hit public markets in the summer of 2021 following the COVID-19 pandemic which accelerated consumer tendencies to cook at home. It went public at $18/share with a market cap of $2 billion and traded up to $32/share within days of the IPO.

Initially, the analyst community was enamored with Traeger, citing the company’s strong consumer advocacy and low market share. In the company’s S1 filing, it is noted that Traeger has an NPS score of 69 (according to online resources, any score above 60 is excellent).

However, the honeymoon period was very short, as Traeger began warning of supply chain issues as early as September 2021. Then it began to miss analysts’ expectations, and in early 2022 , analysts downgraded the stock en masse after the company released a 2022 revenue forecast of $800 million to $850 million, well below consensus estimates of $955 million.

The latest second-quarter results were another disaster as Traeger missed revenue and again lowered its full-year guidance to $640-660 million, down from the $825 million guidance released in March. . Importantly, Traeger reported a 6% year-over-year decline in revenue to $200 million, and gross margins fell 2.4% to 36.7%. Net loss was $132.3 million ($1.12/sh) in the second quarter, primarily due to a goodwill impairment charge of $112 million.

In an effort to turn the business around, Traeger also announced several strategic initiatives, including workforce reductions (expected to save $20 million annually), inventory clearance (will work with channel partners to align inventory with demand) and gross margin optimization (Figure 3). Destocking will continue through early 2023 and gross margin initiatives will show benefits in 2023, so the next few quarters are expected to remain weak.

Looking back, investing in the idea that growth trends inspired by COVID-19 will continue into the future may not have been the best idea. Figure 4 shows Traeger’s quarterly financial summary leading up to its IPO. Revenue growth accelerated from 18% in Q1/2020 to 98% in Q3/2020 and 107% in Q1/2021 as consumers are forced to eat at home and high-income consumers benefit from excess savings and non-essential stimulus checks.

How do I think about valuing Traeger?

If we simply value Traeger as is, it trades at 20.7x Fwd EV/EBITDA, well above the 8.9x in the Consumer Discretionary sector (Figure 5). COOK shouldn’t generate profits, so P/E multiples don’t make sense.

But could there be something more to Traeger?

First, take a look at Traeger’s Q2 2022 financials. Part of the problem, as identified by the company, is that gross margin declined year-over-year from 39.1% to 36, 7%. This is concerning given that prior to the IPO (Figure 4 above), gross margins were consistently above 42%. However, part of the gross margin issue stems from product mix (grills fell from 73% of revenue in Q2/2021 to 59% of revenue) as well as increased shipping costs. It’s probably fixable in time.

The biggest problem, in my opinion, with Traeger and a host of recent IPOs is that their SG&A levels are not properly aligned for their business. They fell into the ‘build it and they will come’ SG&A mindset and overspending.

Even Traeger’s recently announced downsizing, which will save $20 million annualized, will not have a material impact on bottom line, as it is only 6% of 2021 SG&A of $324 million.

What would Traeger be worth to a buyer?

In theory, what would a high-end grill company be worth to a major appliance maker like Whirlpool? We note that even at depressed gross margins of 36.7%, they are well above Whirlpool’s 20% gross margin, so the addition of Traeger should be gross margin accretive. Whirlpool also has longstanding business relationships with many retailers that sell Traeger products like Home Depot (HD) and Lowe’s (LOW). How many more SG&As should Whirlpool hire to sell Traeger grills?

Assuming a company like Whirlpool could reduce Traeger’s general and administrative expenses from 35% of revenue to 20% of revenue (remember that Whirlpool’s general and administrative expenses are 9.2% of revenue), this would improve profitability of 15%. If a large manufacturer like Whirlpool can also improve its gross margin by 3% to 40% (savings in manufacturing, shipping, etc.), we are looking at an 18% improvement in profitability. On current sales of $650 million, this could translate to $117 million in synergies.

With a market cap of just $330 million or $800 million EV, would Traeger be attractive to an acquirer who can potentially find over $100 million in synergies? Even if an acquirer were to pay $1 billion for Traeger, implying a nearly 60% return to shareholders, if the acquirer can improve profitability by 18% as shown above, the transaction could close at less than 6.5 times EV/EBITDA ($117 million). in synergies added to the EBITDA forecast of $40 million).

The risk for Traeger is that post-COVID consumer trends have yet to revert to the mean, which means ongoing sales are below management’s forecast of $650 million. If so, then the stock potentially has more downside, even though it’s already down 90% from the 2021 high.

Furthermore, the M&A analysis above is only intended to stimulate discussion and remind investors to look beyond the overall financial results. There can be no assurance that major consumer products companies will want to acquire Traeger or that the aforementioned synergies will be achievable.

Finally, note that Traeger has $470 million in debt. Compared to its 2022 EBITDA forecast of $35-45 million, that’s a lot of leverage. High leverage can limit management’s ability to react to changing market conditions.

Although Traeger’s overall financial results were disappointing, they primarily reflect an inflated SG&A cost structure. In the hands of an efficient operator, Traeger’s business has the potential to generate over $100 million in synergies with SG&A alone. Traeger may be an interesting speculative name to consider for potential mergers and acquisitions.