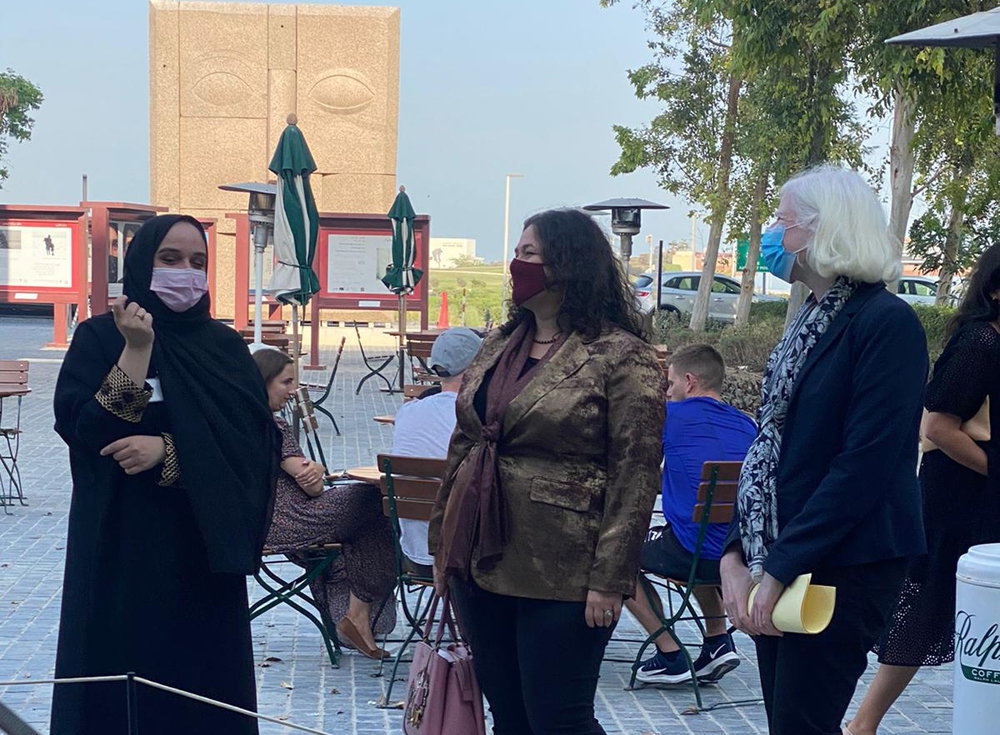 US and French embassies in Doha pay tribute to Virgil Abloh

Acting Deputy Head of the US Embassy in Doha Megan Schildgen (center) and Acting Chargé d’Affaires at the French Embassy Marie-Gaëlle Robles (right) at the exhibition “Virgil Abloh: The Face Behind Louis Vuitton” at the fire station yesterday.

In honor of Black History Month, the US Embassy in Doha hosted a private press tour titled “Virgil Abloh; The face behind Louis Vuitton,” yesterday at the fire station.

The event, organized in tribute to Virgil Abloh, American fashion designer and entrepreneur, was organized in collaboration with the French Embassy in Doha and the museums of Qatar.

The guests were able to visit the exhibition “Virgil Abloh: “Figures of Speech”, the first museum exhibition of the famous American artist and designer in the Middle East.

“I am honored to pay tribute to Virgil Abloh, whose talent and dedication have contributed enormously to American and French society, culture and the arts.”

“We celebrate Virgil Abloh who made history as the first African-American creative director of French luxury fashion house Louis Vuitton. He supported and inspired the black community by breaking down barriers and empowering the designers of black fashion from all over the world. He was very outspoken about social justice and commented on it in his designs. With his untimely passing in November, we lost a pillar of excellence in the fashion industry,” he said. -she adds.

Chargé d’Affaires ad interim at the French Embassy, ​​Marie-Gaëlle Robles, declared: “Virgil Abloh was in Doha a few months ago, on the occasion of the opening of this exhibition. It’s one of a kind because it’s the first exhibition around him in the Middle East.

“As we celebrate Black History Month in the United States, we couldn’t find a better option to celebrate, remember and commemorate together here in Doha.”

Virgil Abloh (1980-2021) made a career out of questioning assumptions and defying expectations.

Raised in the Chicago area, Abloh trained as an architect but found his calling as a fashion designer.

He has worked across disciplines, collaborating with graphic and furniture designers, contemporary musicians and artists, and others in the fashion industry. By taking on projects in new areas, he not only influenced the conversations within them, but also expanded their traditional audiences, reaching millions through social media.

With over 55 works, ‘Virgil Abloh: ‘Figures of Speech, offers an in-depth look at the late artist’s pioneering media practice, from visual arts to music, fashion, architecture and design.

Throughout the exhibition, the focus is on dialogue, which Abloh created through his inventive use of language and quotation marks, transforming the objects he designed and the people who wear his clothes into ” figures of speech”.