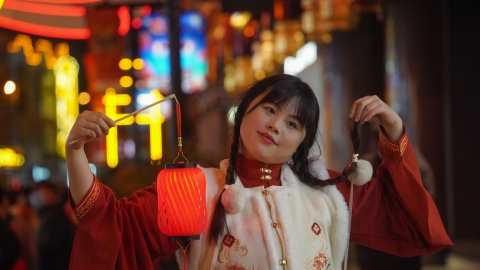 A woman in traditional Chinese dress in the Yuyuan Garden in Shanghai on February 4, 2022.

On the eve of the Year of the Tiger, 20-year-old Qin Zitong chose to wear hanfu at his family reunion dinner.

Originally from Lanzhou, capital of the province of Gansu (north-west China), Qin faithfully wears hanfu, a traditional clothing of the Han ethnic group. The young woman bought an eye-catching outfit with a red jacket and a blue dress. She even handmade a golden hairpin with tassels to match with her costume.

“Donning a new outfit for Chinese New Year has been a long-standing tradition. This year, I decided to wear something different to show my personality,” Qin said. “I specially selected the colors and styles for the Spring Festival, hoping that my elders can also enjoy the charm of hanfu.”

Falling on February 1 this year, the Spring Festival is the greatest occasion for family reunions and heralds the onset of spring.

Instead of preparing days in advance for reunion dinners on Lunar New Year’s Eve, Zhang Ping, 24, ordered partially finished dishes and hot pot ingredients online before he left for home.

“The Spring Festival holiday is the only time for me to be with my family because I work all year round. This year, I hope they can have a relaxed Spring Festival and avoid time-consuming household chores,” Zhang said. He booked a guesthouse near his family home so he could spend the Lunar New Year with his loved ones.

While some create special family activities, others embrace old traditions with new ideas.

Sales of couplets designed by Liu Jingyu began to skyrocket a week before the Spring Festival, with streamer orders exceeding 500 every day.

According to tradition, the Chinese write auspicious poems on red paper and hang them on their front door in anticipation of a prosperous New Year. The tradition is called hanging spring couplets, or Chunlian in Chinese.

But the verses sold in Liu’s shop are much funnier than usual. She uses network buzzwords and cartoon motifs to draw the characters, making them less serious and much cuter.

One shopper left a comment on her online store: “I love the cute style of this typography, which makes our decorations stand out.”

The miniature couplets were also well received by younger shoppers with pets. They hang the mini couplets on the doors of their pets’ enclosures to ensure that every member of the family, including their animal friends, participates in the festival celebrations.

“Each generation has its own memory of the Spring Festival. And we will continue the tradition and culture in our own way,” said Zhang, who distributes lucky money via WeChat.

In a new campaign, Flipkart Grocery urges Indian households not to compromise on quality